An internationally-recognized composer from Port-au-Prince, Haiti will lead student musicians from both Saginaw Valley State University and Mott Community College in an SVSU concert Monday, April 18.

"The Music of Haiti," featuring special guest composer Sydney Guillaume, is scheduled for 7:30 p.m. in the Rhea Miller Recital Hall. The event is free and open to the public. 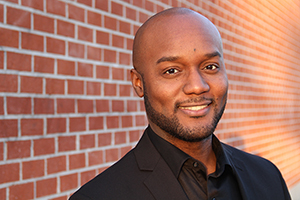 The performance will feature SVSU’s Cardinal Singers and Concert Choir, along with the Mott Community College Concert Choir.‌

Praised by The Miami Herald for their “impressive maturity and striking melodic distinction,” Guillaume’s compositions are considered intricate, challenging and highly spirited. Many of his choral works foster an awareness of the beautiful Haitian culture. His compositions have been featured at numerous conferences and international festivals. His recent engagements include an all-Guillaume concert in New York City’s Lincoln Center and a concert with the Imbroglio Sextet at Carnegie Hall.

Nearly all of his choral music have been commissioned works. He has written for renowned choirs such as the Grammy-nominated Seraphic Fire, the Westminster Chorus, University of Miami Frost Chorale, the Nathaniel Dett Chorale, Illinois Wesleyan University Collegiate Choir, the Saint Louis Chamber Singers and the Miami Children’s Chorus.

For more information on the concert, visit SVSU's Department of Music online at www.svsu.edu/music or Guillaume’s website at http://sydneyguillaumemusic.com/.