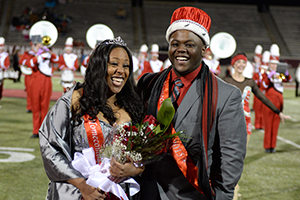 “We were pushing each other,” Keith said. “So, when they called his name, I was scared that they weren’t going to call my name. That was another fear – we wanted to win together because we did the race together.”

Keith said she felt relieved after hearing her name announced. She and Jones represented SVSU’s Office of Multicultural Services.

A graduate of Saginaw High School, Jones said he was honored to be selected, but what really caught the public’s attention was his mother Tonya Jones’ reaction when she heard her son’s name announced as Homecoming king.

“My mom’s reaction was priceless,” Brandon Jones said. “The announcer didn’t even finish my name before she started screaming and shouting.”

“Each candidate was amazing and could have received the crowns and I would have been just as happy,” he said. “I am so grateful and so humbled.”

Jones is actively involved on campus, and currently serves as president of Valley Voices Gospel Choir; as a senior orientation leader, assisting new students acclimate to college; and as a member of the Organization of Black Unity. Jones also has been selected for SVSU’s Vitito Global Business Leadership Institute, an in-depth leadership development program for business students that includes an international travel experience; only 12 students per year are chosen for the program. He remains connected to his community, as well, serving as a mentor for students at Saginaw High School.

Keith also is active on campus. She is a founding member of Pretty Brown Girls, a registered student organization for female minority students; she also is a member of Valley Voices Gospel Choir and the Student Social Work Organization.  Keith also serves as a mentor to other SVSU students through the King-Chavez-Parks 4-S P.A.S.S. grant, a program designed to increase graduation rates through effective instruction, counseling strategies, tutoring, and mentoring programs.