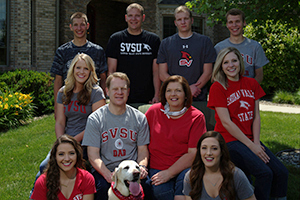 On a beautiful breezy June afternoon, the 10 members of the Gembrowski family gather for a photo at their Freeland home where they are hosting yet another graduation party. They laugh, joke and tease each other while the photographer sets up. Once he gives the signal, each brother and sister falls into place unrehearsed as if they’ve done this family photo thing a time or two.

In the center is the matriarch, Sharon Gembrowski, 1997, B.A. She smiles proudly as the camera snaps off a few shots. To the untrained eye, this might look like any old picture. But if you know the story of the Gembrowski family, then you know there’s something else you can see in this photo:

A flock of Cardinals.

Sharon Gembrowski isn’t the only SVSU grad in the family. Seven of her eight children have either graduated from SVSU or are currently attending, turning most family functions into unofficial alumni outings.

“From a very early age we had high expectations for everyone,” she said. “We told them they need a degree, but they could choose the school and program they wanted.”

And all but one of those children picked SVSU. The result is what Jim Dwyer, executive director of alumni relations, believes is the largest collection of immediate family to attend SVSU. “I can think of a few families with three or four children, but seven? That’s pretty remarkable.”

The Gembrowskis are a model of the kind of generational commitment Dwyer and his Alumni Relations office hope to encourage with new outreach efforts.

“They truly are the poster children for what we are trying to accomplish long-term,” Dwyer said. “We want to cultivate a spirit of loyalty to the university, and the Gembrowskis are living our charge: ‘Red Pride … Pass It On.’”

Peter Gembrowski, one of the youngest of the Gembrowski children and a freshman at SVSU, was among the first recipients of the Alumni Legacy Endowed Scholarship. Alumni Relations created the scholarship this year to benefit children of alumni.

“This program tells our alumni, ‘You are family for life,’” Dwyer said.

For this particular family, the SVSU legacy began with Sharon Gembrowski. She enrolled in 1980 after high school, but eventually put her degree on hold when she and her husband, Marty, moved to Grand Rapids.

Though being a mom was a full-time job, she realized it would be wise to finish her degree. She returned to SVSU in fall 1991, just after their fourth child was born.

Her education was a sacrifice for the entire family. Sharon’s mother watched the kids so she could go to class. She’d often do her grocery shopping in the middle of the night. It was common in the early 1990s to see her coming to campus to drop off a class assignment, five or six kids in tow.

“I remember late at night we would all get together to do our homework,” said oldest daughter, Grace Hoffman, 2009, B.S.N., now a geriatric nurse practitioner in Grand Rapids. “She took us to the Marshall M. Fredericks Sculpture Museum so we could see where mom went to school. It was great.”

Marty Gembrowski boasts that his wife was “insanely disciplined,” keeping checklists and calendars to make sure everything was in order and taking a class or two at a time to get through it. She walked across the stage during commencement in May 1997. A couple weeks later, her twin boys, Peter and Matthew, were born.

And on this June day, it’s those twin boys’ high school graduation the family is celebrating. Matthew will be the first child to attend college elsewhere, while his twin brother readies for his first year at SVSU, studying mechanical engineering.

“Being part of a big SVSU family is cool,” Peter Gembrowski said. “I’ve always gone to campus to do things with my brothers and sisters. I’m right at home.”

Sharon Gembrowski said one of the things she appreciates most about SVSU is the university’s value. All of her children received some form of scholarship to attend and graduated with little to no debt.

“SVSU provided an opportunity for my kids to advance their lives,” she said. “I’m just so happy that so many decided to go there.”

Sharon Gembrowski, 1997, B.A., was far from the last member of her family to attend SVSU. Seven out of eight of her children have graduated from or are enrolled at SVSU.

Anne Gembrowski is a nursing major.