Chris Pryor: Having faith in community 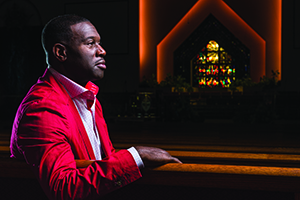 Chris Pryor knows his decision to attend SVSU changed his life for the better.

Today he helps others see the possibilities of a better life through a college education, earned perhaps, right in their own backyard.

It was a mantra his father, the late Bishop Marvin C. Pryor, said often. And so attending college after high school was never up for debate in his family.

Pryor’s experience at SVSU and the relationships he built while on campus helped him forge a bond with the university that still exists today.

He encourages young people in his ministry to attend SVSU, helps fund scholarships for students and is actively involved in a number of programs that bring young people from the Saginaw community to campus. Every other week, he also invites area college students to eat meals cooked by members of his ministry so they can get a taste of home cooking even when away from home.

To Pryor, the role of church and university are very similar.

More than a decade ago, his connections at SVSU helped lead to a job at pharmaceutical giant Pfizer, where he enjoyed a successful business career. When his father passed away in 2010, Pryor answered the call to serve and assumed his father’s role as the head of the church.

During that transition, Pryor sought the advice of former SVSU president Eric Gilbertson. The conversation they shared resonates with Pryor to this day.

“We were just sitting in his office reflecting on everything,” Pryor said, “And I remember him saying that leaders always take the time to step back and think. That’s always stayed with me.”

Today, the community leader boasts that he “truly bleeds SVSU red.” One of his main goals, he said, is to help youths and adults fulfill their destiny. Pryor has great expectations for the Great Lakes Bay Region and strongly believes the next generation of leaders is being built on the campus of SVSU as well as through his congregation of Victorious Believers Ministries.

“My focus is to expand people’s mindsets,” Pryor said. “To show them what else is out there in their life.”