Links between leadership and mental illness explored in SVSU lecture 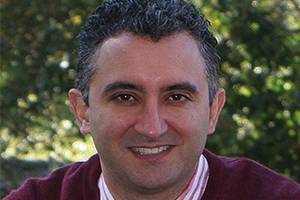 An academic psychiatrist who specializes in mood illnesses, especially bipolar disorder, will discuss the findings of his book, “A First-Rate Madness: Uncovering the Links Between Leadership and Mental Illness.” Nassir Ghaemi will deliver the 12th annual James E. O'Neill Memorial Lecture at Saginaw Valley State University Wednesday, Oct. 21 at 7 p.m. in the Malcolm Field Theatre for Performing Arts.

A New York Times bestseller, the book explores the powerful connections between mental illness and leadership, citing historic figures likely suffering from such illnesses, including Napoleon, Lincoln, Churchill and Hitler.

The text offers a controversial, compelling thesis that an Amazon review explains: “The very qualities that mark those with mood disorders also make for the best leaders in times of crisis. From the importance of Lincoln's depressive realism to the lackluster leadership of exceedingly sane men as Neville Chamberlain, 'A First-Rate Madness' overturns many of our most cherished perceptions about greatness and the mind.”

Ghaemi is a professor of psychiatry and pharmacology at Tufts Medical Center in Boston, where he directs the mood disorders program. He is also a clinical lecturer at Harvard Medical School, and teaches at the Cambridge Health Alliance. Ghaemi's clinical work and research has focused on depression and manic-depressive illness. He has published over 100 scientific articles and over 30 scientific book chapters.

The James E. O’Neill Jr. Memorial Lecture Series was established in 2003 to honor the late Saginaw educator, legislator and community servant. Co-sponsored by SVSU and the Field Neurosciences Institute of Saginaw, the series is intended to dynamically reflect O’Neill’s passion for excellence in government, education and the neurosciences, and to provide opportunities for people to learn about public service from individuals who have unselfishly contributed to the betterment of the human condition.

Ghaemi’s appearance is part of SVSU’s Fall Focus Lecture Series. All talks in the series are open to the public; admission is free of charge.  For more information, visit www.svsu.edu/fallfocus‌.