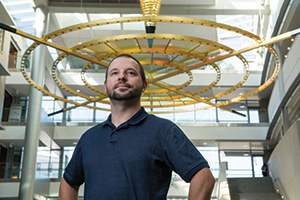 Bobrowski is the founder of a program called TechBridge, which focuses on teaching technical skills to at-risk and homeless Denver youths, ages 15 to 24.

The program gives students the opportunity to learn basic skills in Microsoft Office and Internet usage before expanding into more complex topics like Web development and eventually business analysis and database management. Founded just over a year ago, Bobrowski said nearly 40 students have worked with TechBridge.

“I want to give these youths the skill sets and knowledge to help place them in a job and work through that culture shock of getting into work for the first time,” he said.

By day a business analysis team leader for the city and county of Denver, Bobrowski had the idea for TechBridge for some time but needed additional resources and support to get it off the ground.

He partnered with a local organization called Arts Street, which has a similar mission but focuses on visual arts, music and theater. Together, the two organizations partnered with Urban Peak, an established shelter and educational facility for homeless youth that has been serving the Denver area for more than 25 years.

“I aim to shape TechBridge into an end-to-end service for these youth,” Bobrowski said. “Starting from mentorships all the way to job placement and coaching through the first six months of employment.”

Bobrowski said his passion for serving the community really blossomed during his time as a student at SVSU. During his capstone computer information systems course, Scott James, professor of computer science and information systems, talked to the class about the value of using their skills to work on community projects.

Bobrowski said those “life lessons” stuck with him. “He [James] was the one who really started talking about finding projects that could benefit the community,” Bobrowski said. “We talked a lot in that class about working with schools, organizations or businesses that just couldn’t afford the kinds of services we were able to provide.”

After graduation, Bobrowski served as a volunteer police officer in the Coleman Police Department reserves. There, he started to recognize the importance of proactive programs and opportunities to keep kids out of trouble. That experience, coupled with the birth of his own daughter, helped him appreciate the value of working with young people.

And now that he’s founded TechBridge in Denver, he has aspirations to grow the program to help even more kids.

“Some of these kids are really struggling and I don’t want to see that,” he said. “I want to be proactive in helping them stay out of the criminal justice system and help them find success in the future.”