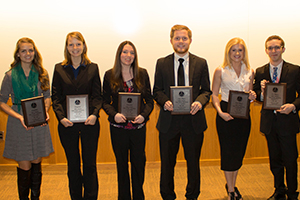 Eric Breidinger, a communication major from Auburn, took home top honors for his speech, “Ground Water Chuck: The Cost of Beef Addiction.” He received a $400 prize.

Jaeleen Davis, a criminal justice major from Burt, finished in second place after her speech, “Wigs 4 Kids: Servicing Children with Hair Loss.” She received a $200 prize.

Third place went to Austin Bauer, a communication major from Linwood, for his speech titled, “The Harms of Pornography.” He won a $100 prize.

Three students took home finalist honors. Each received $50 prizes. They were:
•    Natalie Currie, a pre-occupational therapy major from Greenwood Township in St. Clair County, for her speech, “‘22 Until None.’ Suicide in the Military.”
•    Melinda Dinninger, a communication major from Saginaw, for her speech, “Essure.”
•    Megan Hillman, a social work major from Port Huron, for her speech, “Why We Need Life Skills Classes in High School.”

The Sims Public Speaking Competition began in 1981; it is co-sponsored by SVSU’s Department of Communication and is open to all SVSU students. The competition is endowed by Larry and Linda Sims, long-time donors to the university; Linda recently was appointed senior executive assistant to the president/executive director for communications and external affairs at SVSU. Contestants are required to write an original persuasive speech of 5 to 8 minutes in length.