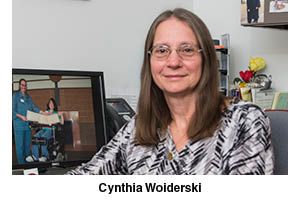 A state organization honored a Saginaw Valley State University disability services leader as she prepares to retire after more than two decades on the job.

The award was a “double honor” for Woiderski, who considered the late Chmielewski a mentor. During her early years at SVSU, Woiderski often sought advice from Chmielewski, former disability services director at Michigan State University.

“I was humbled because, from my perspective, this is a prestigious award,” said Woiderski, who retires from SVSU Friday, June 5. “It was especially nice because this award is in honor of Marge, who was one of the leaders in the disability community.”

David Stokes, the immediate past president of MI-AHEAD, said he nominated Woiderski for her outstanding lifelong leadership and commitment to the disability community in higher education.

“It was high time we recognized her,” Stokes said.

MI-AHEAD, founded in 1987 to support and strengthen the state's higher education disability services community, includes 160 members today. Woiderski has been a member of the nonprofit organization for two decades and served on the group's board from 2010-13.

Stokes said Woiderski was an active participant in the group's annual conferences and served as a leader for the industry's newcomers over the years.

“Cynthia has always had a great ability to think about all sides, to be fair, and she was always up to speed on the law and policy (in disability services),” he said.

Woiderski began her job at SVSU in 1993, when the number of disabled students was 23. That figure this year was 350. Graduation rates for students with disabilities also increased during her tenure.

Some of the changes she has overseen include more handicap-accessible doors, the inclusion of captions on campus-produced educational videos, and handicap-friendly educational tools on services. In recent years, her office also has helped connect disabled students with a donor-funded technology grant that pays for assistive technology.

A Midland resident, Woiderski said she has no immediate plans following her fast-approaching retirement date.

“I think I'm going to relax first, and spend some time with my husband,” she said. “We'll see what happens.”