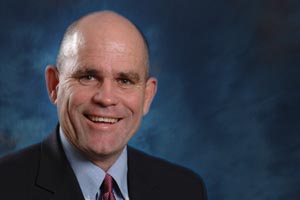 “As we seek to advance SVSU’s reputation and draw upon those relationships that can help us recruit bright students, our alumni must be engaged with the university and serving as our ambassadors to a much greater extent and in innovative ways,” said SVSU President Donald Bachand.

“For thousands of our graduates, Jim was their first point of contact here. His ability to relate to people and his extraordinary enthusiasm for SVSU – the same traits that made him so effective recruiting students – will serve him well in this new assignment, one that is critical to our long-term success."

In his new role, Dwyer will report directly to Bachand. Dwyer had been serving most recently as associate provost for enrollment management. He also previously served as director of international programs and a remarkable 22 years as director of admissions. Dwyer completed bachelor's and master's degrees at SVSU.

“After 35 years in enrollment management, I am eager for this new challenge,” Dwyer said.  “I can’t wait to get started.  I know so many alumni who are so supportive of SVSU. My job now is to get them more engaged in terms of returning to campus, connecting with our current students, helping us recruit new students, and simply showing their Red Pride.”

Dwyer is expected to officially begin his new duties some time in February.