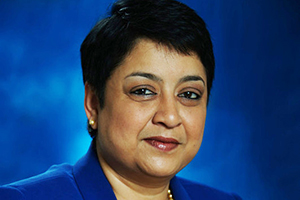 The NFL’s Super Bowl will be played Sunday, Feb. 1 and while stakes are high on the field, advertisers are competing just as fiercely during the television broadcast. Last year’s game, Super Bowl XLVIII, set a new record for the most watched television program in American history, attracting 111.5 million viewers. The price for a 30-second commercial during the game also is at an all-time high: $4.5 million.

Rama Yelkur, dean of the College of Business and Management at Saginaw Valley State University, is one of the nation’s leading experts on whether viewers find ads to be likable. She has studied Super Bowl ads for 20 years and has identified certain factors that can predict whether an ad will appeal to viewers.

Yelkur’s most recent finding is that ads with a positive emotional appeal are better liked by audiences.

“In recent years, there have been more ads that tug on people’s emotional heartstrings,” she said. “Showing affection or enjoyment appeals to the mood of the consumer watching the Super Bowl, someone who often is in a party setting, having a good time.”

Yelkur, Ph.D., and SVSU student researchers looked at all 109 Super Bowl ads for the past two years and found ads’ positive emotional messages correlated very highly with how well the commercials were liked. She and SVSU student Courtney Seamon, a marketing major from New Lothrop, will present their findings at the Marketing Management Association Conference in Chicago, March 25‌-27.

Along with her late research colleague Chuck Tomkovick, Yelkur’s previous studies have found other factors that tend to make ads more likable: the use of humor, including animals or children in the commercials, and the appearance of celebrities. Their work has been published in leading scholarly journals and has been cited widely in popular media, including Advertising Age, CNN Money, The New York Times, USA Today‌, and The Wall Street Journal.

One interesting trend that has emerged among the companies choosing to purchase Super Bowl commercials for this year’s game on NBC is that there will be fewer car commercials.  Last year, 11 auto companies advertised during the big game, accounting for nearly one-quarter of air time, but only six are confirmed for this year (BMW, Kia, Lexus, Mercedes-Benz, Nissan and Toyota).

The dieting company Weight Watchers also announced recently they will be advertising.

“There is a great deal of speculation already about how their aid will be received in a party atmosphere where there tends to be a lot of eating,” Yelkur said.

Several recognized names will be returning as advertisers.

“The usual suspects are in,” Yelkur said.  “M&M/Mars, Pepsi, Anheuser-Busch, Coca-Cola and GoDaddy are all back. SquareSpace is back, too, after appearing in last year’s game for the first time.”

Yelkur joined SVSU in July 2013‌ and will continue her Super Bowl ad research, including SVSU students in the process.  A focus group will watch the game on campus and evaluate this year’s commercials.