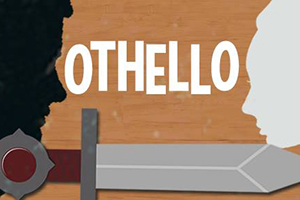 Written in 1603 during Shakespeare's great tragedy period, “Othello” is set in Venice and Cyprus during the military conflict between Turkey and Venice in the late 1500s.

Othello, a Moorish general in the Venetian army, promotes a young man named Michael Cassio to the rank of lieutenant instead of his trusted ensign, Iago. When Iago finds out, he is enraged, and plans to seek revenge on Othello by tricking him into believing that his wife, Desdemona, has been unfaithful to him. To further elevate the conflict, Shakespeare adds Desdemona's father, Brabanzio into the mix, who is outraged at his daughter's “secret” marriage, believing the only way Othello could have married Desdemona is by some method of witchcraft.

The play explores a wide variety of themes including racism, love, jealousy, betrayal, revenge and repentance, and thus, it has been the inspiration for many literary and film adaptations, and continues to be performed in both professional and community theatres worldwide.

The play is directed by Steve Erickson, SVSU professor of theatre. This version of Othello was originally performed in 2006 by the American Shakespeare Collective in Lansing, and according to Erickson, this version is shorter, and more "clear cut" than the original; cutting the cast from Shakespeare's original 14 members to eight. This performance serves as Erickson's eighth Shakespeare production at SVSU.

With the help of Nicola Imbrascio, SVSU Instructor of English, serving as the play's dramaturge, Erickson and the cast hope to bring elements of Moorish culture and accurate Shakespearean language to the performance.

“It's been a challenge but a good experience for the students to perform Shakespeare,” Erickson said, “in terms of actor training along with stage managing and technician training.”

Performances begin Wednesday, Feb. 18 and will be staged in SVSU’s Malcolm Field Theatre for Performing Arts. The Wednesday through Saturday shows will begin at 7:30 p.m. with the Sunday matinee performance taking place at 3 p.m. Tickets are $13 for general admission and $10 for students and seniors [ purchase now » ]. For more information please contact the SVSU box office at (989) 964-4261.