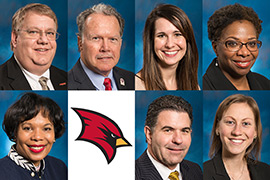 Saginaw Valley state University recognized six of its graduates and one future graduate at its annual Alumni Celebration Friday, Feb. 20. Five alumni were honored with the 2015 Distinguished Alumni Award, the highest award presented by the SVSU Alumni Association. In addition, the Young Alumni and Future Alumni award recipients were bestowed.

The Distinguished Alumni Award is presented to an SVSU graduate in recognition of distinguished service and accomplishment in any field of human endeavor that enhances the prestige of the university.

In the College of Arts & Behavioral Sciences, Patrick McInnis received the 2015 Distinguished Alumnus honor. He currently serves as CEO of Fathead, an industry leader of officially licensed sports and entertainment graphics with headquarters in Detroit. Previously, McInnis served as president of Quicken Loans from 2002 to 2009. He completed a bachelor’s degree in criminal justice in 1988.

In the College of Business & Management, the 2015 Distinguished Alumnus award was given to Dave Abbs. A certified financial planner and owner of Abbs Retirement Planning Advisors in Saginaw, he also is actively involved in the Great Lakes Bay Region, having served as chair of SVSU’s Board of Control and the Saginaw Community Foundation Board. Abbs completed a bachelor’s degree in business with an emphasis in marketing and management in 1983.

In the College of Education, Karen Abbott received the 2015 Distinguished Alumna honor.  During her 35-year career in education, she has served as a teacher, administrator and principal; she presently is the elementary principal at Rutherford Winans Academy, a charter school in Detroit. Abbott completed a bachelor’s degree in elementary education in 1979.

In the Crystal M. Lange College of Health & Human Services, the Distinguished Alumna award was given to Carmella Jones. A registered nurse and an ordained American Baptist clergywoman, she serves as the director of the Faith Community Nurse Program at Holy Cross Health in Silver Spring, Md. Jones completed a bachelor’s degree in nursing in 1981.

In the College of Science, Engineering & Technology, Rick Nash received the Distinguished Alumnus honor. Since 2007, he has served as a global product line executive director and chief engineer for Saginaw-based Nexteer Automotive's steering columns and intermediate shafts business. Nash began his career as a project engineer for General Motors after completing a bachelor’s degree in mechanical engineering in 1988.

The Young Alumni Award recognizes an individual who has graduated within five years, contributed to student and campus life, has a strong affinity for and connection to SVSU, has been recognized for a strong work ethic, and has shown evidence of professional achievement and civic service. The 2015 recipient is Sarah Lockwood, who graduated from SVSU in 2010 with a bachelor’s degree in chemistry. A native of Waldron, she has since completed a Ph.D. in analytical chemistry at Michigan State University – where she received the Outstanding Teaching Award – and currently serves as chief technical officer at LifeBlood, a start-up company in East Lansing.

The Future Alumni Award is presented to an SVSU student of junior or senior class standing who meets the same criteria as the Young Alumni award. The 2015 recipient is Valerie Adams, an exercise science major from Washington Township who is expected to graduate with honors in May.  She has been accepted into Duke University's Doctor of Physical Therapy program, where she will continue her education in the fall.  While at SVSU, Adams has presented at the 2014 National American College of Sports Medicine conference, received a grant to redefine proper nutritional practices for NCAA collegiate athletes, and she is an active member of several student organizations.