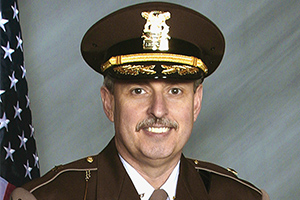 Saginaw Valley State University has hired Leo Mioduszewski to serve as the school’s next police chief. He has served as the sheriff for Isabella County since 2005. Mioduszewski will replace Ron Trepkowski, who is retiring at the end of the calendar year, following 36 years with University Police, including 11 as chief.

“Leo has the qualities we were looking for in our next chief of University Police,” said Donald Bachand, president of SVSU. “He has a wealth of background and experience, and he possesses a great understanding of the complexities involved in employing a community policing model in a campus setting.

“I look forward to bringing him aboard and introducing him to the SVSU community as we work together to continue the high level of campus safety we have enjoyed for many years.”

In his capacity as Isabella County Sheriff, Mioduszewski has overseen 58 employees and an annual budget of $5.2 million. Prior to becoming sheriff, he served 14 years with the Central Michigan University police department, including three years as a sergeant, and 5 years as a police officer in Mancelona, Michigan.

“I’m really looking forward to getting back into campus policing,” Mioduszewski said.

“I miss community policing work. As sheriff, it’s been difficult to do that because it covered a large area. At the college level, it’s so nice because you’ve got people in a smaller area where you can really develop stronger relationships. I’m really looking forward to that.”

Mioduszewski completed a bachelor’s degree and a master’s degree at CMU. He will begin his SVSU duties later this December.