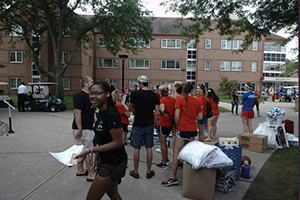 Saginaw Valley State University's campus housing facilities were ranked No. 1 in Michigan by a website grading “Best Dorms” in the United States.

SVSU was ranked No. 26 nationally.

The website, Niche, calculated the rankings using a weighted formula where 70 percent of a school’s score came from students' satisfaction with their housing. The website surveyed 60,000 students from 903 colleges and universities. The rest of the formula was based upon housing costs, capacity and crime rates; each counted for 10 percent of the total score.

News of SVSU’s stellar review was no surprise to Ashley Murdock, an elementary education major from Oxford. She serves as president of the Residence Housing Association, a student organization for SVSU's residential population.

“We have such a positive energy here, and the residence halls are so homey,” the sophomore said. “We really take pride in them. This ranking doesn't surprise me.”

Before applying to SVSU, Mudrock had not visited the campus housing facilities.

“Once I saw the residence halls, I knew this was where I was supposed to be,” Murdock said. “It felt so welcoming and open. It felt like home.”

A new crop of Cardinals will have an opportunity to share that feeling when the fall semester begins. Residential students begin moving in Wednesday, August 26. Classes begin Monday, August 31.   More than 70 percent of the freshman class is expected to live on campus, continuing a seven-year trend.

“Once the semester starts, there's always something going on in the residence halls,” Murdock said. “There are a lot of really awesome programs.”

To view the "Best Dorms" list, go to https://colleges.niche.com/rankings/best-dorms/‌‌.