Next up: police academy

Fun fact: Moore has competed in wrestling and jiu-jitsu matches for seven years. 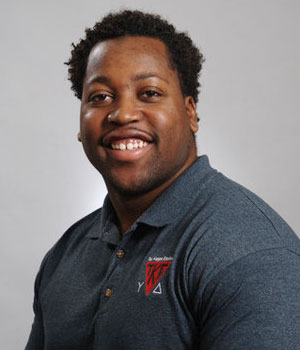 Since childhood, Terrance Moore has been planning a career in law enforcement. Thanks in large part to his experience at Saginaw Valley State University — and all the opportunities it presented — that career already has begun.

Earning that degree, though, will allow Moore to move one step closer to his next career goal: Becoming a deputy qualified to patrol Saginaw County’s roads.

“I’ve always had a passion for law enforcement and performing those duties,” the 2010 Royal Oak High School graduate said. “SVSU has provided me with those opportunities, and now I’m ready to go out and be successful.”

He plans to attend police academy in the fall. With that training finished and his degree in hand, he is expected to begin road duties in 2016.

Moore hopes to rise in the ranks in the coming decades and, eventually, become Saginaw County’s sheriff.

“I could see him as a sheriff,” said one of Moore’s mentors, Joe Jaksa, SVSU associate professor of criminal justice.

“I could also see him getting a master’s or a doctorate degree and work as the chair of a criminal justice department.”

Jaksa said Moore’s “exceptional” communication skills are part of the reason he was able to excel in school and secure a job in law enforcement before graduation.

“It was wonderful to have him in class,” Jaksa said.

“He was hard working, dedicated and diligent. The outside experience he brought into the classroom really enhanced the class. When you have someone who is a good communicator like him, it really enriches the classroom experience.”

Moore in 2015 was named the criminal justice program’s outstanding graduate.

He gave credit to his many successes to SVSU’s faculty.

“All the professors have been awesome,” Moore said. “They’ve always been there for me, like when I applied for the job I have now. I was only 21 years old, and they wrote me letters of recommendation that helped me get that position.”

Moore said his education at SVSU exceeded his expectations. The criminal justice program offered cutting-edge lessons that deepened his understanding of law enforcement. For instance, one of Moore’s classes involved a project — led by Andrew Miller, assistant professor of geography, and James Bowers, assistant professor of criminal justice — that mapped crime “hot spots” in cities.

“We could see where the crime was happening and what type of crimes there were,” Moore said. “From that, we learned about proactive policing rather than just reactive, which is a skill not many people have in the field.”

His interest in law enforcement and community stewardship predates his arrival at SVSU.

Since childhood, Moore idolized his uncle, a now-retired Wayne County sheriff’s deputy who would bring him on ride-alongs. Some of those trips resulted in community service activities. Moore and his uncle sometimes helped mow the lawns of elderly residents.

During high school, he was a 2-time recipient of The President’s Volunteer Service Award for community service work performed in Florida, Tennessee and Texas.

Moore’s community engagement continued while he was in college. As a member of the Tau Kappa Epsilon fraternity, he helped paint the gyms of both the Saginaw YMCA and the Boys & Girls Club of the Great Lakes Bay Region, picked up trash along roadways and cut lawns.

And his efforts to better communities will extend beyond his college years, he said.