Next up: teaching English in Colombia

Fun fact: Marr lived in Iceland for a year in 2003-04, when her mother was stationed there with the U.S. Navy. 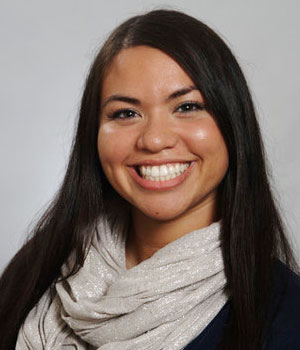 After receiving her bachelor’s degree from Saginaw Valley State University in May, Marr plans to combine those two passions by teaching English in other countries. Her first stop in June is Colombia, as she has been chosen for the English Teaching Fellowship by Heart for Change, an organization that brings English teachers to Colombia.

“Ever since I was 7, I wanted to be a teacher,” the Freeland resident said. “I just love to learn, and one of the great ways to learn is to teach.”

Her SVSU experience — and her life, in general — has prepared her for a career as a globetrotting educator, engaged in the communities surrounding her, she said.

Through a study abroad program, she lived in Costa Rica for four months in fall 2013, when she volunteered to teach English to both children and adolescents. As a Spanish major, she is fluent in that language, but Marr said she also knows elements of 11 other languages: Arabic, Bengali, Chinese, Filipino, French, German, Italian, Japanese, Portuguese, Swahili and Tagalog.

Marr has a well-traveled family. Her mother is from the Philippines, of Asian and Hispanic descent — and her parents met while serving in the U.S. Navy, traveling the globe. Her brother currently serves in the Navy and is stationed near Tokyo, where she plans to teach once she’s earned a teaching certificate at SVSU within the next year.

Marr also has hopes to teach in China, Taiwan and South Korea, as well as in nations in South America.

“Every experience abroad builds me as a person,” she said of her desire to teach abroad.

“It’s so fun to get out, to experience a different culture. I like to consider myself a person who is open to different things.”

Here at SVSU, Marr’s international interests were on display when she directed both the 2014 and 2015 Intercultural Night, an event featuring music and other expressions of culture from the school’s international students.

Her commitment to seeing the show — and its students — succeed provided one example of Marr’s outstanding leadership abilities, said one of her SVSU mentors.

“Stephanie is one of the most positive and upbeat students that I have had the opportunity to work with,” said Dick Thompson, SVSU’s ombudsman who has worked at the campus since 1970.

“She cares deeply about people, and it shows.”

Her involvement on campus is extensive.

Marr was a representative in Student Association (SVSU’s student government), and served in SVSU’s Residence Hall Association. She has been a member of the SVSU chapter of Alpha Phi Omega, a national co-ed service fraternity where she served as a voting delegate at the national conference in Chicago in December. Marr also joined the International Student Club, where she served as vice president during 2014-15. She has worked in SVSU’s Orientation Programs and Multicultural Services offices, and was a tour guide for the university’s Club Red group.

Her extensive résumé served purposes near to her heart, Marr said.

“Leadership, friendship and service are not just the cardinal principles of Alpha Phi Omega; those three principles have been important to me ever since high school,” said the 2011 Freeland High School graduate.

“I just want to continue teaching, and to touch other people’s lives.”