Fun fact: Aldubayyan initially thought of attending college in Australia, but an SVSU representative at a higher education fair in Saudi Arabia convinced him and his friend to choose Saginaw instead. 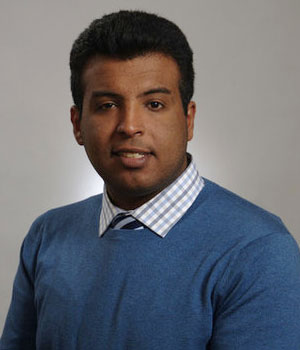 Five years later, he’s mastered the language along with the academics as he prepares to graduate in May and attend the master’s program in applied information technology at George Mason University in the fall.

“It has been an incredible experience,” the Riyadh native said of his growth at SVSU. “I feel like being here has developed so many of my skills.”

In a 5-year span, Aldubayyan went from speaking little English to becoming one of the university’s student leaders. His leadership at SVSU included serving as the Student Association’s ombudsman, and as a member of both Sigma Pi fraternity and Forever Red, a student-alumni networking organization that raises funds for student scholarships.

Pat Shelley, an international student advisor whom Aldubayyan considers a mentor, said one of the highlights of his career included being invited to stand with Aldubayyan during the 2014 SVSU homecoming football game where he was recognized as a member of the school’s homecoming court.

“He is a very good example of an international student who has made a very successful effort to go beyond the comfort zone of his own countrymen and language to meet and mix with all students on campus,” Shelley said.

Leaving “the comfort zone” wasn’t easy, Aldubayyan admits now. In fact, during his first year on campus — when he was still learning the basics of English — Aldubayyan struggled to find his place. Then he applied as a student worker for SVSU’s Orientations Programs.

“I was a little terrified to do it at first,” he said. “After talking to Rachel (Florence-Spaetzel, the program director), she talked me into it. I got an interview and I got the job, and when I saw all the Orientation leaders and how enthusiastic and energetic they were, I said, ‘You know what? This is amazing. I love it.’”

The experience helped him clear a hurdle socially at SVSU, and soon he joined other opportunities on campus. He gives credit to other faculty and staff that helped him adjust and excel at the new setting. Those supporters include Bryan Crainer, associate dean for Student Life and leadership programs; Scott James, professor of computer science and information systems; Jason Swackhamer, director of Web Communications; and Richard Thompson, ombudsman.

Aldubayyan said he would encourage any international student prospect to enroll at SVSU.

“I wish I could stay another year,” he said.

Still, he is excited for the next stage of his life: graduate school. Once he graduates from George Mason University, he hopes to find work as a project manager in the information technology field.

His experience at SVSU has convinced him to stay out of his comfort zone while pursuing his career.

“I would like to eventually go back home to Saudi Arabia and stay there, but I wouldn’t want that right away,” Aldubayyan said. “I’m enjoying this time.”