Next up: Miami University, Ph.D. program in ecology, evolution and environmental biology

Fun fact: Strasburg is the first member of her family to attend college. 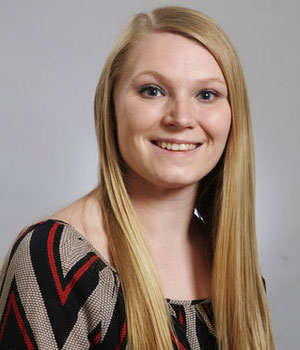 Instead of being repulsed — as plenty of kids are — by the slimy, slippery nature of amphibians, the Millington native wanted to bring home frogs and newts as pets.

“I was the one who would go out and catch them in the woods,” she said.

Today, Strasburg continues to distinguish herself from her peers thanks to her love of all things amphibious and alive.

After she graduates from Saginaw Valley State University in May with a bachelor’s degree in biology and Spanish, she will leap-frog the typical path of a student who graduates with a baccalaureate degree and then enters a master’s program. Instead, Strasburg in August will immediately jump to a doctoral program when she moves to Oxford, Ohio to attend Miami University’s Ph.D. program in ecology, evolution and environmental biology.

There, she will study amphibian conservation.

“The populations of amphibians — animals such as frogs and salamanders — are declining because they’re susceptible to pollutants and diseases,” the 2010 Mayville High School graduate said. “They are important to this world because they’re a keystone species. We need them to sustain other species.”

Eventually, Strasburg plans to teach in higher education while continuing research in the field of ecology.

One of her SVSU mentors, Art Martin, associate professor of biology, said Strasburg has the work ethic, intelligence and passion necessary to become a solid Ph.D. student as well as a college professor.

“She’s one of the most aggressive students I’ve ever had,” Martin said. “Once she figures out what she wants, she jumps in feet first in a way I’ve never seen another student jump in. She’s relentless, and it has led her to huge success.”

While Strasburg’s love of frogs began in childhood, several experiences at SVSU cemented her desire to seek a career centering on the animal.

After switching one of her majors from biology to criminal justice, it was a trip outside the state that inspired her to return to her biology studies.

Through the campus Alternative Breaks program, Strasburg was one of 12 students who traveled to South Padre Island, Texas to help rescue, rehabilitate and release injured sea turtles in March 2012.

Her interest in research was inspired by another SVSU experience.

Martin last year convinced Strasburg to apply for a grant through SVSU’s Herbert H. and Grace A. Dow Student Research and Creativity Institute. Receiving the funding, Strasburg designed her own project, which analyzed the behavior of crayfish in different aquatic environments. In January, she presented her findings at the Society of Comparative and Integrative Biology conference in West Palm Beach, Florida.

Strasburg is a self-described “ball of energy,” whose interest in biology led her to participate in SVSU programs such as the Saginaw Bay Environmental Science Institute as well as the Dow Science and Sustainability Education Center. She also has kept busy at SVSU as a resident assistant, a Writing Center tutor, a member of both Alpha Mu Gamma and Sigma Delta Pi — both national collegiate foreign language honor societies — as well as a member of both the National Residence Hall Honorary and the Residence Hall Association.

“It has been life changing,” Strasburg said of her SVSU experience.

“I came here not knowing what I wanted to do, and SVSU has helped me discover my passion and find my path. I love everything about this place. I am truly going to miss it.”