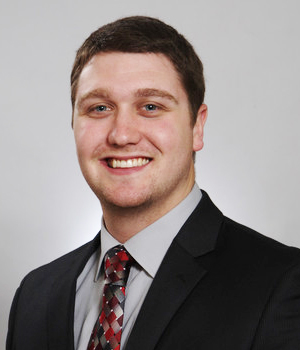 The Saginaw Valley State University student was hired full-time as a math teacher at Bridgeport Middle School, weeks before earning a bachelor’s degree in mathematics education in May.

“I really appreciate the fact that they noticed how hard I was working,” said Sheppard, who was a student teacher at the school before district officials hired him on a full-time basis in April.

“I’m really honored that they can trust me with a class without having too much to go on. It says they noticed that I work hard and that I’m passionate about the kids.”

Not everyone is surprised by Sheppard’s rare feat. Even those who understand the challenging job market for K-12 schools in Michigan.

“It didn’t surprise me,” Gould said about news of Sheppard’s job. “He is great in public speaking, and he’s a genuine, team-orientated leader.”

Gould, a member of SVSU’s faculty for eight years, said Sheppard was among the “top 5 percent” of his students. Gould said Sheppard’s natural teaching talents and his efforts to network with officials in the K-12 system likely won him the full-time position.

“He was always willing to go above and beyond,” Gould said.

Sheppard said his efforts were aimed at achieving a goal he had been pursuing since he was a child, watching his now-retired father teach special education and coach track at local schools.

“I like it when kids have that ‘ah-ha’ moment, and they understand they might not have gotten there on their own,” the 2010 Frankenmuth High School graduate said.

Through his SVSU education, Sheppard had field experience at Bay City Handy Middle School as well as Bridgeport High School.

“I was thinking I would teach higher-level classes, but it’s been interesting to work with middle school students,” he said. “They’re really fun once you get through that hard exterior and goofball-ness.”

While he’s excited for the new career, Sheppard said he will miss his experiences at SVSU.

“Everyone I came across here was extremely helpful,” he said. “I’ll miss being a student in class, instead of being the one with everyone’s eyes on you.”