Next up: London theater internship

Fun fact: Longwell’s acting career began at 4, when she played a duck in a production of “Noah’s Ark.” “I had little yellow suspenders and matching yellow shoes,” she said. “My line was, ‘Quack.’ That’s where it started.” 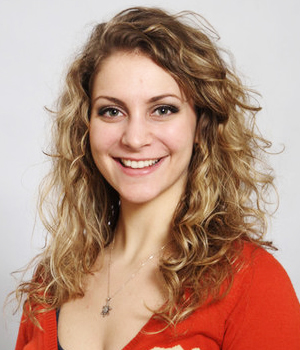 Lexee Longwell is about to make her dreams come true.

When she graduates from Saginaw Valley State University in May, the theatre major will move to London, England to join Ovation Limited Theatre Co. as an intern at the arts group’s venue, Upstairs At The Gatehouse.

“I woke up in the middle of the night a few months ago after having a dream of being abroad someplace,” said Longwell, who has appeared — many times as a lead actor — in 19 SVSU productions.

“I’ve always wanted to go abroad, but I never had time. After that dream, I decided I was going to make time.”

So Longwell sent an application to Global Experiences International Internship Programs, and within weeks, she was accepted. The program then placed her with the London theatre troupe, which will be staging a production of “The Drowsy Chaperone” during her stay from June to August.

David Rzeszutek, SVSU assistant professor of theatre, “was not surprised” to learn Longwell secured the internship.

“She is a driven and talented student,” said Rzeszutek, a director who has cast Longwell in a number of his SVSU productions.

Her responsibilities will include costume and stage design, public relations work and a variety of behind-the-scenes activities.

“I can’t wait,” she said of her first trip overseas. “I’m kind of nervous, but I have a lot of faith in taking chances. If things have fallen into place in such a remarkably short amount of time, I’m sure it’s going to be good.”

Longwell is accustomed to immediate results. After the 2011 Hartland High School graduate arrived at the university via the Distinguished Theatre Arts Scholarship, she scored a leading role in her first audition for an SVSU production, “Wiley and The Hairy Man.”

“I was told this was a school that allows opportunities, and there I was, as a freshman, and I had a lead,” she said.

Her favorite roles at SVSU include playing Desdemona in “Othello” this February, and Audrey in “Little Shop of Horrors” in April 2012. Others may remember her as Ulla in November 2014’s “The Producers.”

Rzeszutek said one of his favorite memories of Longwell happened in February 2013, when she performed with some of the nation’s best college thespians at Washington, D.C.’s Kennedy Center during the American College Theatre Festival. The two were riding in an elevator following one of Longwell’s performances.

“She turned to me and said, ‘I now know I can do this,’” Rzeszutek recalled. “It was the moment that Lexee needed for herself; to give herself permission to succeed. I have no doubt that she will find continued success in her career.”

Born in Tennessee, Longwell describes her life in the performing arts as “an inevitable thing.” Her parents played in a band together in Ohio and encouraged Longwell and her older sister to participate in the arts from a young age.

“I have such an amazing support system with my family,” she said. “They’re all passionate about this with me. The same with my professors here, and my friends.”

When she returns from London, Longwell hopes to move near her family in Holland, Michigan and act in community theatre in the Grand Rapids region. Eventually, she wants to join Chicago’s professional theatre scene.

“I love putting energy into positive outlets,” she said, “and being able to be a part of something that’s bigger than me.”