Next up: University of Rochester, Ph.D. program in neuroscience

Fun fact: Salois once worked aboard Bay City’s Appledore IV sailboat, which provides tours and participates in events across the Great Lakes. 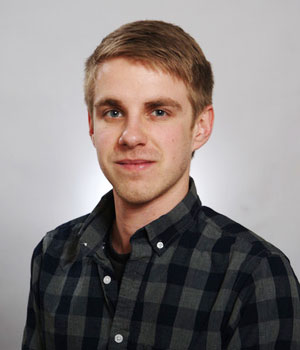 For years, Garrick Salois racked his brain, searching for his niche as an undergraduate student.

Eventually, the Kawkawlin native realized the brain was his niche.

Salois this fall will attend the University of Rochester’s Ph.D. program in neuroscience, studying for a career in brain research.

“The brain is one of the most complex things I know of,” said Salois, who will graduate from Saginaw Valley State University in May with a bachelor’s degree in psychology.

Salois’ fascination with the organ began in SVSU’s Brain Research Laboratory, six years after he graduated from Bay City Western High School in 2007. His early years in college included stints as both a business and sociology major. Eventually, he settled on psychology. Then in 2013, when he heard a classmate’s presentation on the Brain Research Laboratory, he decided to investigate its opportunities.

“I have been in that lab ever since,” he said.

The Brain Research Lab specializes in how the brain changes following traumatic injury.

“It took me a while to adjust,” Salois said of his initial experience in the lab. “I started off by doing a lot of reading to see what other people were doing. I was in the lab every day.”

Jeffrey Smith, SVSU’s Malcolm and Lois Field Endowed Chair of Health Sciences, called Salois “an exemplary example of what is possible at SVSU.”

“He is a hardworking, motivated learner who wasn’t sure what he wanted to do, but through exploration as a student at SVSU, found his passion,” said Smith, who helps oversee the SVSU laboratory. “Garrick fully embraced the life of a young scientist.”

Smith said Galois has excelled in engaging in challenging coursework across multiple departments.

His accomplishments at SVSU include earning both a Herbert H. and Grace A. Dow Student Research and Creativity Institute grant as well as a Field Neuroscience Fellowship, presenting research at national conferences, and being part of a team that published research in the leading journal for neurotrauma research.

“He’s changed my life,” Salois said. “I wouldn’t have been able to do any of this without him.”

Salois said finding this niche was worth the wait.

“There are incredible opportunities here if you’re willing to work for them,” he said.