Next up: master’s program, Indiana University School of Public and Environmental Affairs

Fun fact: Before attending SVSU, Linskey had never visited a nation outside the U.S. “Not even Canada,” he said. Since then, Linskey has traveled to 12 countries. They are Sweden, the Czech Republic, Poland, Slovakia, Germany, Austria, Switzerland, France, Spain, the United Kingdom, Italy and India. This summer, he will add Canada and Peru to that list. 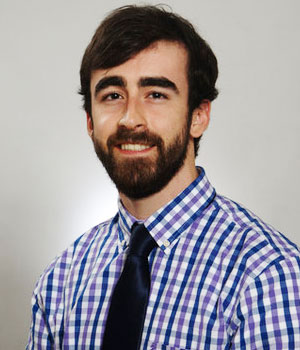 Evan Linskey’s travels have taken him to 12 countries, but what was in his own backyard may have had the heaviest influence on his career aspirations.

The Prudenville native was raised alongside Houghton Lake, and now he is pursuing a profession in environmental management, analyzing data collected from watersheds across the world.

“I’ve always enjoyed water,” said Linskey, who will graduate from Saginaw Valley State University with a bachelor’s degree in economics in May.

“There’s a lot of information coming out of the environmental sector. Someone has to interpret it.”

When he begins his master’s program at Indiana University’s School of Public and Environmental Affairs in the fall, Linskey already will have logged plenty of hours in environmental management research in his own home state. At SVSU, he worked as a research assistant for the geography department, helping the community by studying the water quality of the Kawkawlin, Pigeon and Pinnebog rivers, analyzing how each affected the Saginaw Bay.

Linskey’s passion for scientific research as well as community engagement and service learning became a heavy theme of his SVSU undergraduate experience.

He has participated in several opportunities with SVSU’s Alternative Breaks, a program that sends students to volunteer in destinations across the world during the winter and spring breaks. He traveled to Atlanta to help children living in poverty; to Murphy, North Carolina to remove invasive species from the Hiwassee River; and to New York City to provide meals for the terminally ill.

Linskey also took advantage of SVSU’s Study Abroad connections, living in Prague for a semester in fall 2013 while studying economics and intergovernmental organizations at the University of Economics.

“I wanted a new challenge, and so I decided to go to a country with a language I don’t speak,” said the 2011 Houghton Lake High School graduate.

“It was a challenge. And I loved every minute of it.”

Along with his classwork, he was involved in the university’s Honors Program, served as the first president of the newly-founded Economics Club, and worked as an economics and statistics tutor in SVSU’s Center for Academic Achievement. He recently finished his Honors Program thesis on how higher education, religious and other social institutions impact secondary school performance.

One of Linskey’s mentors, Kaustav Misra, SVSU assistant professor of economics, described the student as a quiet, motivated “explorer.”

“His academic work has been recognized by many faculty members in the Department of Economics, and as a result, they recommended him as our outstanding econ graduate for this academic year,” Misra said.

“I do believe that he will reach his goal to become a geospatial researcher and solve various rural problems in Michigan. I am sure Evan will represent SVSU well.”