Fun fact: Emily’s sister, Megan, also attends SVSU. She is a mechanical engineering major and is involved in many of the same campus organizations as her sister. 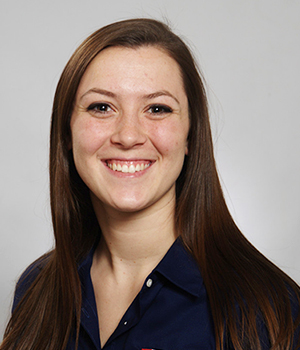 All of those titles could apply to Emily VanFleteren, one of Saginaw Valley State University’s more active students in recent years. In May, the Troy native will add the title “graduate” to that list. Those familiar with her expect VanFleteren will continue building a fine reputation — and stellar résumé — for herself once she begins her professional career as a teacher.

“Emily is one of the most dynamic students I have ever had the pleasure of working with,” said Bryan Crainer, SVSU’s associate dean for Student Life and Leadership Programs.

And she wears it proudly.

“My big thing is Red Pride,” VanFleteren said of the moniker for SVSU’s school spirit. “I’ve had that instilled in me by my two biggest mentors, Bryan and Merry Jo Brandimore (associate provost for Student Affairs and dean of students), and I try to encourage that in newer students.”

VanFleteren’s love of SVSU began almost at first sight. While she was still a junior at Bishop Foley Catholic High School, she — along with her mother, aunt and sister — embarked on a 2-day, 7-college tour in search of the best fit for VanFleteren.

When she arrived at SVSU, she was greeted with an energy and campus community that seemed close-knit and comfortable.

VanFleteren returned for five more campus visits before attending her first class. She didn’t apply to another institution.

Her outstanding involvement at SVSU began right from the start and will continue after graduation. She was a member of the Foundation Scholars Program, which brings together exceptional incoming freshmen. And, today, she remains part of the Roberts Fellowship program, a student leadership development initiative that will send her to Asia in May.

She is an avid sports fan with the distinction of claiming victory in consecutive years on the SVSU football field, with neither honor requiring her to wear gear or a helmet.

In 2014, as the campaign’s coordinator, she accepted the Battle Of The Valleys trophy for spearheading a 1-week fundraiser that collected $32,294 in charity for the Cory Rivard Jr. Promise Foundation. Battle Of The Valleys is an annual fundraising competition between SVSU and Grand Valley State University that concludes with the top campaign receiving a trophy during the rivals’ football game.

A year earlier, she was crowned SVSU Homecoming Queen during a football halftime ceremony.

“It was very rewarding as well as extremely humbling,” said VanFleteren, who also has been involved in campus organizations such as the National Residence Hall Honorary, the Residential Housing Association and Orientation Programs.

VanFleteren said other rewarding experiences include serving as a peer academic adviser to the student-athletes on SVSU’s football team — a role she hopes to continue as a graduate — and her work as president of Forever Red, a student-alumni networking organization that raises funds for student scholarships.

“Emily did just about everything a student could do at SVSU,” said Crainer, VanFleteren’s advisor for Forever Red.

“When talking about her SVSU legacy, there may not be anything more significant and long-lasting than her contributions to Forever Red. Emily served as president of the organization for its first four years, and took the group from an idea to an organization of prominence.”

So, what’s next? VanFleteren has been hired for a full-time teaching position at Swan Valley Middle School in rural Saginaw County.

After graduation, VanFleteren doesn’t anticipate she will miss SVSU much, as she doesn’t exactly plan on leaving.

“I don’t expect to miss a football game this fall,” she said. “I hope to participate as an active alum and I’m really excited to come back and help Forever Red from the alumni side of everything. I have had an awesome experience as a student and I can't wait to stay involved.”