Fun fact: Skwirsk is a recreational archer. “I’ve sacrificed a lot of hobbies because of the hours involved in being a pre-med student, but I’m hoping to pick all that up again,” he said. 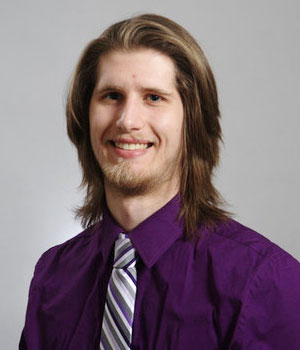 Brandon Skwirsk knew he wanted to become a doctor in the sixth grade.

But it wasn’t until he began studying for the profession at Saginaw Valley State University that he truly realized the career was a match made for him.

“I fell in love with it here,” said Skwirsk, set to graduate from SVSU in May with a bachelor’s degree in biology.

Specifically, he wants to become an emergency room doctor. The next step in chasing such a career begins this fall when he becomes a medical student at the Michigan State University College of Human Medicine. There, he expects to spend two years at the pre-clinical campus in East Lansing and another two years on clinical studies at a medical facility somewhere in the state.

One of Skwirsk’s mentors, Gary Lange, professor of biology, said the Flint native “is bound to make SVSU proud” in his career.

“Brandon impresses me with his intelligence, care, and dedication to his academic studies,” Lange said.

“In all the classes he has taken from me, Brandon immersed himself into his work to deeply understand the specific field of biology. All students strive to understand the general concepts of a course, but Brandon delved significantly more deeply into the subjects to discover universal principles about the study of life.”

Lange predicts Skwirsk will prove “exceptional” in the medical field.

Skwirsk said his interest in the profession began as a boy.

“I was inspired by the doctors I saw when I was growing up,” said the 2011 Flint Carman-Ainsworth High School graduate. “They were such positive influences, and my pediatrician was wonderful. I knew that’s what I wanted to do.”

He received his first taste of training when he joined the Boy Scouts, eventually achieving the rank of Eagle Scout in 2010. The experience educated him on performing C.P.R., dealing with illness and setting broken arms.

“This is the place where I found out who I was,” Skwirsk said. “It really validated what I wanted to do. This definitely prepared me for where I’m going.”

Skwirsk already has contributed to local health care. As a member of SVSU’s chapter of Phi Delta Epsilon, a fraternity for prospective medical doctors, he helped raise more than $6,000 for Hurley Medical Center's Children's Miracle Network in 2013. The network supports improving medical facilities and healthcare for ailing youths.

He also participated in SVSU’s Alternative Breaks program, which sends volunteers to locations across the globe during college winter and spring breaks. In December 2011, he traveled to San Francisco, where he helped victims of homelessness.

“It’s been invaluable, the experience with the community,” said Skwirsk, who rarely misses a chance to donate blood when local organizations set up donation centers on campus.

As he prepares for the next chapter in life, Skwirsk said he will miss SVSU when he graduates.

“Every chapter has to have an ending,” he said. “I’m just glad this is where I spent this chapter.”