All about the learning

Tai Chi Lee can look back with pride on a fulfilling career at SVSU. Since his arrival in 1988, the professor of computer science has published more than 51 scholarly papers and three books on subjects such as computer security, NASA mission software and computer operating systems. For his efforts to advance understanding in his discipline, Lee was recently awarded the Earl Warrick Award for Excellence in Research, SVSU’s highest recognition for faculty scholarship. “All these years, it’s been my number one goal to promote undergraduate research,” he said.

Lee, who announced his retirement in spring 2014, stayed on through the summer months to complete work on a high-performance computing platform made possible through a three-year, $123,000 National Science Foundation grant. In regard to the proper role of research at a teaching institution, Lee noted that “teaching comes first, but research is important. Without research, we just teach the old stuff.”

Lee has worked closely on collaborative research projects with many students, most of whom have gone on to graduate school. “I’m very proud to have to have made a difference in students’ lives,” he said. He has helped students acquire external grants, present papers at 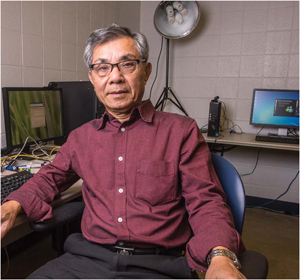 conferences and apply for prestigious graduate programs. Among those students he recalls were James Kruchkow, 1995, B.S., who completed a Ph.D. at the University of Idaho; Eric Henne, 1999, B.S., who finished his master’s degree at Wayne State University; and Frederick Miller 1994, B.S., who earned his Master of Science in Technological Processes at SVSU in 2003 and is now a vice president at Yeo & Yeo Consulting. “When I think about these students, I’m really very proud that they are so successful. They stand out for me because they had motivation, were hard- working and had a keen interest in research.”

He also mentioned former students Amanda Pavlicek, 2012, B.S., now with Chase Bank, and Heather Mindykowski, 2009, B.S., a Web application developer at Dow Corning. While he has not noticed a dramatic increase in the number of female students majoring in computer science, he thinks “the women who do major in computer science tend to be at the top of the class.”

In order to enhance his skills and pursue more knowledge, Lee earned a second master’s degree — in electrical engineering and computer science — from the University of Illinois at Chicago, subsequent to completing his Ph.D. “I have to credit my parents for instilling in me a desire to learn,” he said. “My dad would say, ‘If you don’t have an education you can’t go any further.’ But it was really my mother who encouraged me to work hard, study, learn.”

Lee looks forward to a well-earned retirement where he can spend more time with a son, who lives in Minnesota, but also travel abroad with his wife Jessica. “I also want to catch up with my reading in literature and history. I love those subjects but have mostly studied other things. I’ll probably keep reading technology too,” he laughed, “just to stay current.”

It’s always about the learning.