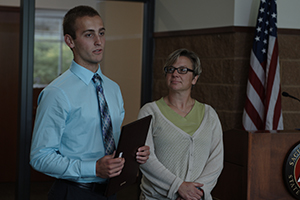 “I knew it would be cool to win, but I didn’t understand the magnitude of it until I received the award,” said Zwerk, who earned a $500 check as part of the accomplishment.

Holly Little, SVSU lecturer of biology, nominated Zwerk for his work on an assignment given during her fall 2013 plants and civilization course. Zwerk was tasked with presenting a report on the journey of a crop from its roots in the soil to its role economically, nutritionally and culturally.

Little, in her nomination letter, described Zwerk’s efforts as “beyond my expectation.” His report centered on how sugar is extracted from sugar beets. The assignment led him to tour a Michigan Sugar plant for research.

Zwerk, a management major, was familiar with the crop before his assignment. His father and two other relatives own Vassar-based Zwerk & Sons Farms, a 7,000-acre operation that farms sugar beats, wheat, corn and beans.

Zwerk has worked multiple jobs at the family establishment. “I like going to work every day,” he said of his outside-of-school activity. “There’s always something to do there, even in the winter.”

While Zwerk describes himself as “the lowest guy on the totem pole right now,” one day he plans to own the family business. He would become the fourth generation in his family to manage the company.

Zwerk expects his SVSU education will help him achieve that goal. The S.K. Yun Science Award and its $500 check, meanwhile, will help him pay for tuition, books and other fees associated with that education.

The S.K. Yun Science Award is named in memory of S.K. Yun, an SVSU physics professor from 1969 until his death in 1994. Yun was known for his research in theoretical high-energy physics.

“I was very grateful,” Zwerk said about receiving the award. “It was an honor to represent the Yun family and the university.”