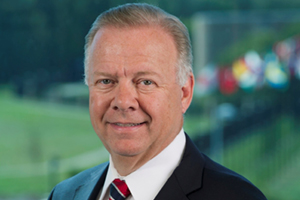 Earlier this year, Kepler announced he would retire after 39 years at Dow. He has been considered one of his industry's leaders in information technology deployment. Recognized for his influence in cyber security and risk management, Kepler was appointed to the U.S. National Infrastructure Advisory Council, a group that advises U.S. presidents on issues relating to the security of U.S. infrastructure sectors and their functional systems, physical assets and cyber networks.

Kepler has been a member of the board of directors at Teradata Corporation, an analytical data solutions company; the Toronto-based TD Bank Group; the U.S. Chamber of Commerce; and the National Safety Council. He also has served as board chairman of the MidMichigan Innovation Center, a nonprofit committed to growing Michigan small businesses.

Kepler resides in Midland with his wife, Patti. Both have been active in the community and are member’s of the United Way's Alex de Tocqueville Society.

The first of two SVSU commencement ceremonies will be held Friday‌, Dec. 12, at 7:30 p.m. in the Ryder Center. Graduates from the colleges of Health and Human Services, and Business and Management will be recognized.

The second ceremony is Saturday‌, Dec. 13, at 11 a.m. in the Ryder Center. Students from the colleges of Arts and Behavioral Sciences; Education; and Science, Engineering and Technology will be recognized.