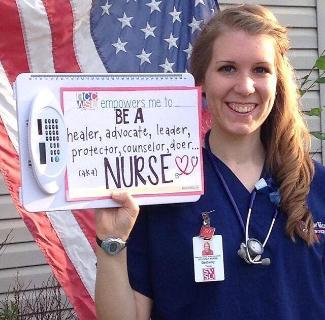 The line goes, “I never lose an opportunity of urging a practical beginning, however small, for it is wonderful how often in such matters the mustard-seed germinates and roots itself.”

Thrun said attending both the National Association of College and University Residence Halls, and the National Conference for College Women Student Leaders has provided her the sort of inspiration Nightingale was speaking of.

“I’ve been able to take advantage of learning about something bigger than myself,” Thrun said. “I learned a lot of lessons and have the power to pave the way for my mustard seed, and power others to find their mustard seeds.”

Thrun, who plans to graduate from SVSU in December 2015, said she hopes to gain some clinical nursing experience before pursuing a postgraduate degree. Her ultimate goal is to become president of the American Nurses Association, a national group that fosters high standards in nursing practice and advocates for the rights of nurses in the workplace.

For now, Thrun is a resident assistant for SVSU’s student housing complex, Pine Grove Apartments. Her association with the university’s residential housing led to her inclusion in an 11-student delegation that traveled to the National Association Of College And University Residence Halls annual conference at the University of Wisconsin-Eau Claire, from May 30-June 2.

“It was a chance for residential hall leaders to combine and network, and see what we could do for each other,” Thrun said.

Over 2,600 people attended the event.

One day after Thrun returned to SVSU, she boarded a flight headed toward the University of Maryland. There, she was among 1,000 students to attend the National Conference For College Women Student Leaders, from June 5-7. The event’s agenda featured a number of leadership-geared seminars from public figures — including Chelsea Clinton — along with networking opportunities.

“It was fantastic,” Thrun said of the experience. “An amazing conference.”

Thrun’s trip there was funded entirely by two scholarships from both the Midland and national branches of the American Association of University Women, a group that organizes the conference along with Student Affairs Administrators In Higher Education.