Tamara (Tammy) Arizola Barrientos, 1995, B.A.; 2002, M.A.T., is a success story on many levels. A self-described “nerd” at Arthur Hill High School in Saginaw, she spent a year at Central Michigan University and another year at Delta College before transferring to SVSU. Even as a commuter student, the elementary education major felt connected and supported, due in great part to the assistance she received from the Office of Multicultural Services. “We would go there just to hang out,” Barrientos said. “One time, I wanted to drop a course because I didn’t think I would get an ‘A’ for the semester, 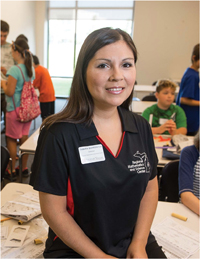 but my mentors encouraged me to stick it out. And I’m glad I did because I ended up doing better than I thought I would.”

As a Cardinal, Barrientos used her connections with other students she met in Multicultural Services to get involved in campus organizations. She founded a campus chapter of a sorority, Sigma Lambda Gamma, for Latina students. “When I attended the national conference, I was so excited to be among so many high-achieving women,” Barrientos said. “At that moment, I felt proud I had made the most of my opportunities to be successful in life.”

A graduate of the Master of Arts in Teaching program at SVSU, Barrientos at first hesitated to pursue an advanced degree. She was already working as a middle school teacher and had good experiences with parents and students at Ricker Middle School. In addition, she pointed out, “a lot of the time [school] teachers are reluctant [to earn a graduate degree] because they don’t see the value it will hold in their classroom, how it will directly affect them on a day-to-day basis.” But Barrientos said that in earning her MAT, she learned that her work with research made her a better teacher.

She now advocates for all teachers to learn more theory through graduate studies, adding that it will markedly increase their success with students.

Barrientos joined SVSU’s professional staff in 1997, working first as a coordinator of the Regional Mathematics and Science Center and, since 2010, as its director. The Center, which is housed in the College of Education, is part of a network of 33 such regional centers; Barrientos designs curricula for local schools and helps educators improve their teaching.

Barrientos takes as her philosophy the importance of doing everything to help students who are challenged by math and science and supporting math and science teachers who wish to improve. “It’s all about seeing the students be successful,” Barrientos said. “Even now, as director of this center, if I can help one teacher, I know that ultimately I’m helping a lot of students learn that it is possible to enjoy math and science.”