From the Israeli Army to the O.T. Classroom

Prior to moving to the U.S. in 2008 and joining SVSU in 2011, Gafni-Lachter completed her compulsory service as a medic in the Israeli Army. After a short time, she began training medics (and then ultimately, trained the trainers), and discovered her love of teaching.

Something she learned as a 19-year-old working with all sorts of people—from combat soldiers to MD.s—was the value of a respectful, relationship-based approach to the job.

Upon completion of her military duty, Gafni-Lachter discovered something else: that she was passionate about her choice of occupational therapy as a career. “It is the perfect combination of all that interests me—scientific, medical, psychological, developmental, in-depth critical thinking and art helping a client find a path back to health.” 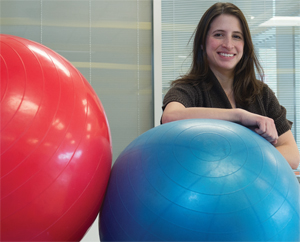 Gafni-Lachter said what she enjoys most about teaching at SVSU is how relationships with students are valued at an institutional level. “At a lot of larger universities, it’s hard to find professors who are available to talk to students, let alone relate to them. I find my students the most rewarding part of the job. I enjoy engaging them in meaningful conversations, asking them, ‘Who do you want to be? Do you want to make a difference?’”

Much of what Gafni-Lachter learned in the army has been translated into her teaching philosophy and learning expectations of herself as well as of her students. “I expect myself to be knowledgeable, and I expect the same of my students. I think my students would say I am tough in terms of my professional expectations. I want them to work hard, and in the end, have a sense of pride and a feeling that they have gained something from the class.”

The importance of great mentors is another take-away from her army experience that Gafni-Lachter has brought to the O.T. program. “In O.T., much of the learning is a reflective practice, and that comes from interacting with someone who is asking tough questions.” Seeing an opportunity in O.T. to enhance the classroom and fieldwork education, Gafni-Lachter revised the second-year leadership course she teaches and created a mentoring program. Early indications from second-year mentors and first-year mentees suggest success.