Everything is coming up French

In her fourth year of teaching at SVSU, Julie Foss, assistant professor of modern foreign languages, is enthusiastic about sharing the French language with students on a daily basis. “I love the exchange of energy in the classroom. The most rewarding thing is to see students grow in the language and acquire a love for the culture.” As the only full-time MFL faculty member in French studies, Foss enjoys the challenges and rewards of shaping and working with the program.

“The nature of teaching a foreign language requires smaller class sizes,” Foss said, “and I love that because even though I teach students at varying levels of proficiency, I still get to know them on an individual level.” Not only does Foss thrive in the classroom teaching French and foreign language teaching methods, but she also looks forward to time she spends as the advisor of the SVSU French Club, La Société Française. “Exposure is everything; the more contact students have with the language, the more proficient they become,” Foss said. It’s for this reason that Foss encourages students to immerse themselves as much as they can, including conversation hours and attending events like the French film series presented throughout the academic year. 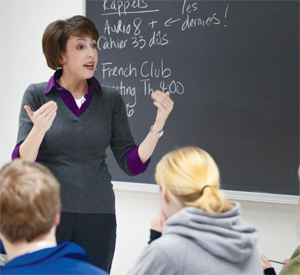 Although teaching wasn’t the career she originally anticipated after graduating with her bachelor’s degree in French and history, Foss knows now that the classroom is where she belongs. After briefly attending law school and working in the mortgage industry for 10 years, Foss wanted a change. It wasn’t until she was working as a hiring manager training new employees that she considered teaching as a possible career choice.

Because everything-French had remained a constant in her life—the literature, art, music, and movies—it was easy for her to recognize that the language was something she was passionate enough about that she could teach it and love doing so. Foss returned to school, earning her secondary teaching certification and master’s degree in French from Eastern Michigan University and a Ph.D. in French Language and Literature from Michigan State University.

Hoping to inspire her students in the same way she was inspired, Foss comments, “My high school French teacher was so passionate about the language, it was hard to resist. Once I started learning the language, I fell in love with it all—the language, the history, and the culture; I want to do the same for my students.”