Nursing major Sarah Lewan has an impressive list of honors and activities related to her academic and student life at SVSU. The Royal Oak native is a recipient of a Presidential Scholarship and is a University Foundation Scholar. Lewan is also involved in His House Christian Fellowship, one of more than 130 registered student organizations on campus, and is a member of Living Center Community Council, a residential complex advisory group. All impressive, but what makes Lewan’s story really amazing is Project Sunset.

In fall 2011, Lewan received a letter from a non-profit agency asking for financial support to help buy mosquito nets for communities in Africa where malaria runs rampant. Most who die from malaria are kids; more than 500 million victims worldwide die from this disease each year. Lewan was moved, 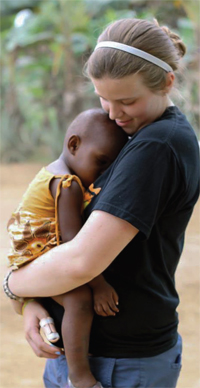 but calculated that the cost of each net was higher than it needed to be, simply because of organizational overhead. So, she decided to do it herself. Lewan enlisted the help of a graphic designer friend to design a t-shirt. Sales of t shirts would buy mosquito nets. The first 50 were sold even before they arrived; today, she is sending orders to people around the world.

Just as Lewan had taken the time to analyze the cost difference between sales through a large non-profit and what she would be able to do on her own, she began to think about the purchase of the nets. She knew that weavers in Ghana create the same nets, and their livelihoods depend on those sales. A well-intentioned project on one hand could devastate a local economy on the other. And so Lewan decided to buy local.

“When I began fundraising for mosquito nets,” Lewan said, “I had no idea I’d be the person to hand-deliver them.” But she did. In June 2012, she spent 12 days in Gabon, giving out nets and sharing with the locals how the nets work to save lives. Leaving one village, she met a man who predicted, “You’ll be back.” Three weeks later, the man called her to say that his organization—E4 Projects—wanted to adopt her work. Soon after, E4Projects featured Project Sunset on its website (e4project.org/programs/project-sunset).

Since then, Lewan has attended, by invitation, the International Justice Conference. In March, she was part of a 12-person “medical impact” team that visited Gabon. Once again, Lewan’s Project Sunset was there to distribute nets. Lewan plans to graduate with her B.S.N. in December 2015.