Connection between tooth infections and Alzheimers?

Charles Weaver is an assistant professor of health sciences. A native of Detroit, he holds bachelor’s and master’s degrees in psychology as well as a second master’s degree (neuroscience) and a Ph.D. in Medicine. Jobs and journeys in his life have included working as a research fellow, traveling the world with a Christian mission group, teaching middle school in the Bronx and returning to Michigan, first to work for Field Neurosciences Institute on Alzheimer’s research and, ultimately, teaching at SVSU.

We spoke with Dr. Weaver about his research and finding a home at an institution that is small enough to have true faculty-student interaction and engagement yet large enough to offer state-of-the-art facilities where students are highly involved in research.

Tell us about your academic journey.

I always knew I wanted to be in the field of science. My dad was a chemist with the city of Detroit and I loved being with him in the lab. I wasn’t exactly sure what I wanted to do; I thought about biology and sports medicine and then psychology hit me. I really enjoy listening to people talk; in psychology, you do less talking and more listening. I still wasn’t sure about psychology until studying behavioral neuroscience. I loved learning about the workings of the brain and how that is translated into behavior. That led to wanting to study learning and memory, and disorders that cause deficits. That’s when Alzheimer’s came into the picture …

... which led to your second master’s degree and Ph.D.?

Yes, I wanted to move further into the science of pathogenesis. I sought out renowned scientist Peter Davies, and that’s what led me to the Albert Einstein College of Medicine. 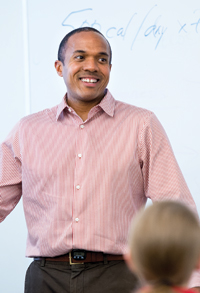 After your time with mission work and middle school teaching, you came back to Michigan.

[Dr. Gary Dunbar], a friend, mentor and executive director of Field Neurosciences Institute, asked if I was interested in working on an Alzheimer research project, which led me to FNI and back to Michigan. In 2011, the opportunity to join SVSU presented itself. I wanted to be at a small university, one where I could be doing the research I wanted to do. My greatest personal educational experience was someone really teaching me, so SVSU was perfect — I could do research and mostly work with students while maintaining collaboration with FNI.

Talk about your research.

We’re currently examining the role of dental infection as a cause of or exacerbation factor for Alzheimer’s. A 2006 study showed that 45 percent of all Alzheimer patients had no teeth; the earlier that loss, the more susceptible the person was to the disease. Our theory is that a bacteria [enterococcus faecalis], involved in serious dental infections, could be a factor. One of the theories we’re testing is that if we find the bacteria in the human brain, we need to find the entryway to the brain; that could be the upper palate, which is close to the olfactory bulb. One of the first symptoms of Alzheimer patients is a loss of smell, so this could be a promising path to explore. Our plans include collaborating with Rush Presbyterian Medical in Chicago as providers of human tissue for us to do more infection research.

And SVSU students are doing this type of research?

Absolutely, and much of the credit goes to Dr. Jeffrey Smith [The Malcolm & Lois Field Endowed Chair of Health Sciences]. He has made sure our facilities are state-of-the art and has encouraged and mentored students, many of whom are now in doctoral programs around the country. SVSU really supports student research. Many science projects are funded through The Herbert H. and Grace A. Dow Student Research & Creativity Institute. At the November [2013] conference of the International Society for Neuroscience in San Diego, we had students presenting at a session on traumatic brain injury and recovery.

How would you describe SVSU students?

Most are hardworking and very dedicated to their studies. Our students don’t have a sense of entitlement, so they don’t take things for granted. I have really enjoyed interaction in the classroom; it has been rewarding and insightful and has helped me as an educator. Our [geographic] diversity is so interesting. We have rural students who don’t understand urban students (and vice versa), and getting the differing backgrounds together helps us all better understand things.

Charles Weaver isn’t out to become the man who cured Alzheimer’s. But he wouldn’t mind one day being credited for a better understanding of the disease.

Weaver, assistant professor of health sciences since 2011, is researching the affect dental infections play in the development of Alzheimer’s, the most common form of dementia.

A study Weaver oversaw in summer 2012 suggests a tooth decay-causing bacteria—Enterococcus faecalis—may be linked to Alzheimer’s. “We grew some brain cells in a petri dish, and once they were thriving, we added the bacteria and looked to see if the neurons would degenerate in the same manner we saw in Alzheimer’s,” Weaver said. “We found that degeneration to be very similar.”

Next, Weaver hopes to analyze different nerve tracts and blood vessels to see if the bacteria spreads through the same routes traveled by Alzheimer’s. He is applying for grant support of about $45,000 for the three-year study.

The findings may do more than shed light on one way Alzheimer’s develops. They may also place additional emphasis on the importance of tooth care, and question the benefits of root canals.

“Despite all the campaigns, we take (dental health) too lightly,” the Detroit native said. “Our diet plays a huge role in our dental health.”

He said Americans, in particular, could stand to cut high acid goods from their diets.

“You look at some cultures around the world that don’t have this diet, and even if they don’t brush often, they have very little, if any, tooth decay,” Weaver said.

He said the research could lead to questions about root canals, the procedure that removes a tooth’s root to eliminate bacteria-based
decay. “The problem is that 80 percent of root canals go bad within five  years,” he said. “That’s the only medical procedure I can think of  where you’re leaving a piece of dead tissue in the body. There needs to be a serious reevaluation, or find a better way of eradicating bacteria
at the root of the tooth.”

Weaver said he hopes to utilize SVSU students in the research.

“They are really hard working students here,” he said. “They really know how to grind it out. It’s a good match for what I want to do.”

Weaver said the outcome could make their work an important leap in the world’s understanding of a prevalent disease.

“I’m not out to cure Alzheimer’s,” he said. “That’s much bigger than me. The whole field has to put together the pieces; they have to come up with causes and cures, and I want to do my little part.”