An SVSU professor will travel to Africa to further her research after receiving a highly competitive fellowship from the American Geographical Society.

Sara Beth Keough, associate professor of geography, was selected to receive the 14th annual McColl Fellowship, given to only one scholar each year. 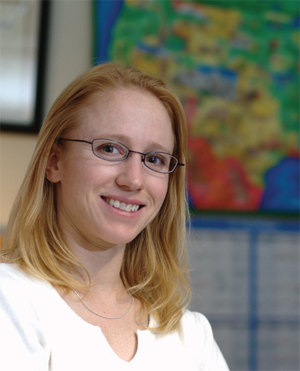 Keough had applied for the fellowship previously and when she received a thin envelope very soon after the application deadline, she was surprised that her proposal was chosen.

“In my experience, thin envelopes mean bad news, and early responses typically mean bad news,” she said. “You know they weed out the bad ones first. So when I opened it and it said ‘Congratulations!’ I was very excited.”

Keough will use the grant to cover travel costs to Niamey, the capital of Niger, in December 2013 to complete a project that will explore water consumption, storage and transportation in the West African country.

“A lot of social scientists and geographers have looked at health and access to water, especially in drought-stricken areas like Niger, but nobody has really looked at the objects,” Keough explained. “What holds the water? What contains the water once it is in a private residence? When you think about all the different ways in which water is carried and stored and transported, it has implications for economics, and for politics and for health.”

Joining Keough on the trip and in the research will be Scott Youngstedt, SVSU professor of sociology. He specializes in anthropology and is a scholar of the people and culture of Niger. Youngstedt also speaks Hausa, the country’s most common language, allowing the pair to study the practices among the population more widely.

“I think it’s really important for our department and our program—this is an international award,” Keough said. “In the list of previous winners, I don’t see any regional state universities.”