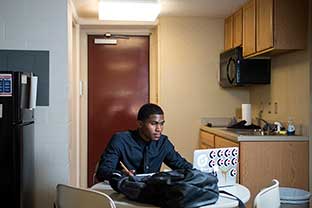 Once again, our student housing has been recognized at the highest national level by the website Niche. In its 2019 Best College Dorms in America ranking, SVSU was ranked No. 1 among all public universities in the U.S. Among all higher education institutions, we were ranked No. 8 nationally. This is an especially impressive feat considering that these rankings are determined based on a weighted formula where 70 percent of a school's score comes from students' satisfaction with their housing. U.S. Department of Education data also plays a role. Congratulations to our colleagues in Housing, Residential Life, and all the faculty, staff and students who combine to create the friendly, welcoming residential community our students enjoy and rate so highly.

Raising Red Pride on the road If you walked through the courtyard Wednesday, you likely noticed representatives of the Secretary of State or our own Alumni Relations office, who coordinated on a joint effort to register voters and reimburse people who ordered SVSU license plates. It was a successful campaign on both fronts. In total, 61 students registered to vote and 210 SVSU license plates were distributed. I will be excited to see all the new traffic advertising our Red Pride on the roadways. Similarly, today's Study Abroad Fair offers countless opportunities for students eager to discover more about their academic passions in a setting outside of the United States. Academically and culturally, our Study Abroad opportunities are first-rate experiences that often have a profound effect on students’ lives. I always enjoy hearing our students talk about the ways in which the program helps them grow. Here is one example: https://youtu.be/x7qtDBTBzAA.

A great showing for a heroic event

There was an outstanding turnout Tuesday evening for the 9/11 Heroes Run event hosted here for the sixth year. In total, 227 people participated in the fundraising event. This year's run benefited The Travis Manion Foundation as well as the Bay Veterans Foundation. I enjoyed speaking with the runners and their families. Thank you to everyone who helped coordinate and organize this important gathering honoring our active military, veterans and first responders. The volleyball team rose to a 7-3 overall record after defeating Lake Superior State 3-2 during an exciting Faculty and Staff Night contest at home. We have a well-conditioned, competitive-minded team; they are 5-1 in five-set matches this season.

Our cross-country student-athletes also performed well recently. The men's team finished second and the women's team finished third overall at the Calvin Knight Invitational Saturday. On the men’s side, Tom Goforth won the race and was named the GLIAC Men's Cross Country Athlete of the Week. Both teams compete again Friday at MSU during the Spartan Invitational.

Congratulations to Dustin Pumford, who earned GLIAC Men's Golfer of the Week honors after his performance at the Northern Michigan University Match Play Invitational in Marquette. His perfect 6-0 record helped his team earn a third place finish overall. Our women’s golf team hosts the SVSU invitational this weekend, while the men’s team plays at Ferris State.

I hope to see many of you Saturday during our 1 p.m. home football game vs. Truman State. The combined scores of our two wins to start the season is 86-17. For those who can’t make it in person but want to tune in, this week’s radio broadcast will be carried on 106.3 FM, instead of the usual 100.5 FM. Go Cards!