Kyle Sarafolean's life is filled with characters, and he wouldn’t have it any other way.

For the uninitiated, he explains, “You’re essentially a concept artist that specializes in characters.” 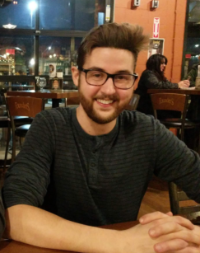 Now based in Atlanta, Georgia, Sarafolean has worked as a freelance graphic designer since September of 2018 and has created character designs for several major studios and companies, including Hulu, Sony, FX, and Netflix.

Some of Sarafolean’s latest work can be seen in Marvel’s Hit-Monkey, which premiered on Nov. 17 on Hulu, garnering his first on-screen credit for a major project.

Although he now describes character designing as his “dream job,” Sarafolean had no intentions of becoming one when he first enrolled at SVSU.

Raised in Midland, he was confused about what he wanted to pursue after high school; he felt that Saginaw Valley State University represented security.

“It was close to home, and I could kind of dabble a little bit without taking too much risk. . . . It was safe for me to experiment with college. And I, luckily enough, ended up finding something that stuck for me.”

Sarafolean attended SVSU from 2010 to 2014 and received a Bachelor of Arts with a major in graphic design and a minor in art. He credits much of his success as a graphic designer to the skills he learned in college. 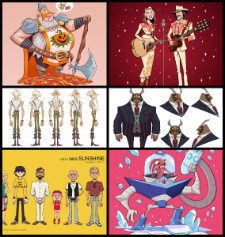 Explaining his work during critique in art classes improved his public speaking and communication skills. Learning how to make comics improved his drafting, planning, and deadline meeting skills. Designing a portfolio taught him how to professionally present himself and his work to potential employers.

“There was a distinct success rate difference between students who I knew graduated from SVSU who didn’t take that portfolio class and the ones that I know did,” he said. “Those were the ones who got jobs right away.”

However, Sarafolean believes that his Intro to Graphic Design class gave him some of the most valuable experience overall. In this class, all assignments were done by hand.

“You have to know what’s going on with these things and create it from nothing. There’s no ‘CTRL+Z’ when you’re painting on Bristol board. You’re committed.”

Not having digital programs, preexisting assets, or any way to rearrange elements in a piece after they were already placed meant that Sarafolean gained a deeper understanding of each graphic component and how they combined to tell a story.

“The foundation of design and how to use it in a way that communicates to viewers is probably the biggest takeaway I had from my graphic design education,” he said.

After graduating from Saginaw, Sarafolean got a job as a corporate graphic designer in the Metro Detroit area. Unfortunately, the position was not what he had hoped for.

“I was like a month in, and I was thinking to myself as I pressed the ‘down’ arrow on the elevator leaving work, ‘Man, I do not know if this is the right thing for me.’”

Shortly after that, he returned to his college sketchbooks for the first time in years and began drawing to make up for the lack of creative stimulation in his work life. This was the first step on his path toward working as a character designer.

“It was really when I understood that all those lessons translated exactly into what I was doing as a character designer that I really started producing the work that I put in my portfolio that got me recruited and working in the animation industry,” he said.

After two years of working as a freelance comic artist for titles like Cleo and Magaeia, Sarafolean flew to a Los Angeles-based animation expo in early 2020, where he was recruited to do character design work for Hit-Monkey.

Despite the stress from moving to another part of the country and lockdown orders for the COVID-19 virus coming only a few weeks after starting his new job, he handled the transition into remote work gracefully.

Sarafolean now takes great pride in what he and the rest of the team at Hulu put into the project.

“All I can focus on is, ‘Did I do a good job?’ I’m not worried about if it’s good enough for critics, or good enough for this troll online, or whatever. I am proud of this, just having made it… It’s been awesome.”