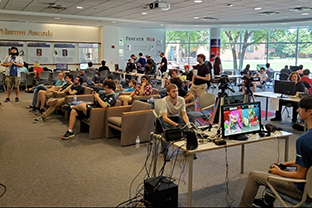 Inspired by passionate players and fans in a rapidly-growing field of competition, Saginaw Valley State University will hit the “start” button on its own club sports team in fall 2020 for competitive video game players.

“The level of student interest in eSports is extremely high and we look forward to providing this new opportunity for student engagement,” said Brian Thomas, SVSU's associate vice president for Academic Affairs.

eSports are played with individual competitors or teams of up to eight people. Competitions can be played with teams in a central location or via online-based tournaments. Those competitions feature players battling for top scores in popular games such as "Fortnite," "Overwatch," "League of Legends," "Super Smash Bros." and "Hearthstone" on consoles such as Nintendo Switch, Playstation 4 and XBox One. Worldwide market revenue from eSports competition surpassed $1 billion last year, compared to $130 million in 2012.

SVSU's campus is ripe territory for such a competition and its students are hungry to participate, Thomas said. The opportunity will offer more than simply a fun outlet for fans of video games.

“By creating a dedicated space with high-end gaming computers, students will be able to practice and compete while at the same time socializing around a sport that they love,” Thomas said. “With the rapid growth of eSports as an industry, this will create new opportunities for academic collaborations ranging from computer science and electrical engineering to business and graphic design.”

SVSU's eSports club will launch with a dedicated space on campus – at a location still yet to be determined – likely featuring 13 gaming computers along with video streaming and monitoring equipment, Thomas said.

At the same time, eSports will be organized competitively as a club sport. The gaming space will be available to members of the club team and other SVSU students as well.

James Stahl, an SVSU criminal justice major, said he expects an eSports club will be a smash hit with his peers. He would know. As a leader of an SVSU student organization that has hosted video game tournaments, Stahl has witnessed a growing appetite for a club sport dedicated to gaming on campus.

“It's going to be big,” Stahl said, predicting the response of students to an eSports club. “Depending on how it's handled, it could be really big.”

Stahl served three years as president of Press Start, the SVSU student organization that hosts a variety of video game-centric events across campus. He said a tournament hosted recently by the group attracted more than 100 gamers from across the state to SVSU.

“To see more than 100 people in a bracket tournament, playing 'Super Smash Bros.' is chaos but so fun,” said Stahl, who remains a member of Press Start this year.

Stahl has attended gaming tournaments outside of SVSU, including a Detroit-based competition known as The Big House 8 that featured more than 1,000 players during an October 2019 event.

“Unless you've been to a gaming competition, it's hard to describe the excitement in the room,” he said. “It's a spectator sport, so it's a lot like a crowd watching football.”

Before the eSports club is launched in the fall, SVSU plans to host video game tournaments on Saturday, May 2, Thomas said.

The main event will involve a tournament playing "Overwatch," a popular first-person shooter available on all major gaming consoles. That particular game will be limited to high school students while others will invite all members of the public. "Overwatch" participants will compete for $1,000 scholarships on the stage of the Rhea Miller Recital Hall. Tournaments for "Fortnite," "League of Legends," and "Super Smash Bros. Ultimate" will take place at the same time. All tournaments will be free of charge and include prizes.