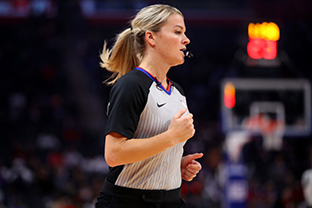 A Saginaw Valley State University alumna's passion for basketball helped her land a role as the sixth female referee hired in NBA history.

Jenna Schroeder, a Clio native who received a bachelor’s degree in communications from SVSU in 2009, was hired by the NBA after years spent refereeing college, the WNBA and the NBA developmental league known as the G League.

“I was shocked by the timing of it,” Schroeder told the Associated Press. “But I was obviously hoping this was my year. Nobody’s ever truly ready, but I’m as ready as I can be.”

She is scheduled to referee her first regular season NBA game tonight — Wednesday, Oct. 23 — when the New York Knicks travel to play the San Antonio Spurs in Texas. The game tips off at 8:30 p.m. EST. Viewers can watch it via NBA League Pass, a subscription service that is offering a free preview of the start of the season through Oct. 29. Click here to access the San Antonio game after it begins.

She will serve as one of four female referees this season.

She recalled her own experiences with referees when she was a player. Schroeder told the AP she fouled out of her first three games at SVSU, also picking up a technical foul “for a colorful comment.”

Before enrolling at SVSU, she played for the women’s basketball team at Oakland University.

Schroeder told the AP she began refereeing while in high school, and later, after she graduated from SVSU: “Someone looked at me one day and asked why I didn’t just do it as a profession, and I said, ‘You can do that?’”

Schroeder joins the relatively small class of female NBA referees that formed when Violet Palmer and Dee Kantner officiated their first league games during the 1997 season.

Fans can learn which games Schroeder officiates by accessing the NBA’s referee assignment webpage. Assignments are announced at 9 a.m. on the day of each game at https://official.nba.com/referee-assignments/.