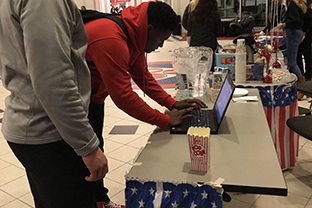 Saginaw Valley State University's commitment to civic engagement has been recognized with the  institution being selected as a “Voter Friendly Campus.”

The Voter Friendly Campus Initiative is led by the national nonpartisan organizations Campus Vote Project and NASPA - Student Affairs Administrators in Higher Education, which hold participating institutions accountable for planning and implementing practices that encourage their students to vote.

To participate in the Voter Friendly Campus designation program, SVSU worked with the organization to craft a statement of interest, draft and execute an action plan for democratic and civic engagement initiatives and events happening on campus and evaluate their efforts to set new goals for the future.

The staff of the SVSU's Center for Civic Engagement also created a coalition of community members, on-campus partners and student groups who helped draft and submit SVSU's application.

“Your institution's efforts to break down barriers and empower students with the information and tools they need to participate in the political process puts the civic mission of higher education into action,” read a statement by organizers of the initiative when SVSU's designation was announced.

As part of their action plan, the Center for Civic Engagement included its plans for the 2018 Cardinals Vote campus initiative, which saw hundreds of SVSU students registered to vote, educated about their choices and transported to the polls.

“I think it's a combination of things. Students across campus are interested in this and putting time into it, and there is kind of a wave of youth voter engagement improving,” Hupfer said. “SVSU students as a whole were engaged in this. They were interested, and when the resources were there, they engaged with them. I think people were just excited to get involved.”

The Voter Friendly Campus designation program was started in 2016 with the goal of helping institutions develop plans to coordinate administrators, faculty and student organizations in civic and electoral engagement. It focuses primarily on voter registration, voter education, voter turnout and treating students as voter advocates.

“It reinforces the commitment across the country and the recognition that when students vote and get involved, great things happened,” Hupfer said. “This is just a large support network for that, and that's pretty promising.”