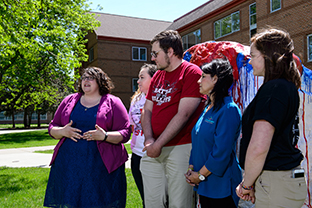 Enthusiastic student leaders organizing SVSU's Battle of The Valley – formerly known as Battle of the Valleys – selected The ROCK Center for Youth Development as the tradition's next benefactor during a live online announcement Monday, June 3. (Video link: https://bit.ly/2IlzVrg)

Nora Lipetzky, one of the student leaders involved in the selection, said the nonprofit's focus on engaging and empowering teens heavily influenced her decision.

“It is my hope that our partnership this year with The ROCK will help shift a focus on investing in our youth” said Lipetzky, a native of Palos Heights, Illinois who earned a bachelor's degree in political science in May and is pursuing a master's degree in public administration.

“The youth are the future of the world we live in, and by providing positive activities and programs to students in the Great Lakes Bay Region – just like The ROCK has for so many years – we are investing in the futures and well-beings of our young people.”

The ROCK Center for Youth Development's activities include summer camps, opportunities to connect with mentors, pool parties, experiential learning initiatives and a variety of social events aimed at connecting the region's youth to the community while also promoting a healthy lifestyle.

“These activities provide alternative avenues for teens, rather than engaging in harmful and detrimental activities,” said Lipetzky, who serves as speaker of the house for SVSU's student government, known as Student Association.

Lipetzky and her Student Association peers picked The ROCK Center for Youth Development from among 56 regional nonprofit organizations whose representatives applied for Battle of the Valley.

Teresa Gwizdala, director of programs at The ROCK, said she was honored her organization was selected from such a large pool of applicants.

“We were so excited to hear the news,” she said. “It's a great thing to forge this kind of connection with SVSU.”

Beyond receiving the proceeds, the relationship is valuable because of the network it will strengthen between The ROCK's teenage participants and the SVSU community, she said.

“We are trying to promote college attainment among our kids,” Gwizdala said. “Partnering with a university can help with that.”

The age group for much of The ROCK's staff is about the age of the typical college undergraduate. Because of those demographic similarities, Gwizdala said she anticipates – and hopes – the Battle of the Valley experience also will lead to SVSU students establishing mentor relationships with The ROCK's teens.

“There are so many benefits to this,” Gwizdala said of her organization becoming this year's charity partner.

Many nonprofit organizations have reaped the benefits of SVSU students’ commitment to improving their community. SVSU students have raised $425,657 for organizations since the first Battle of the Valleys in 2003. Last year, they collected $36,000 for the Barb Smith Suicide Resource and Response Network.

When students host Battle of the Valley during the week spanning Oct. 6-11, the event will take on a slightly different form than in the past. The tradition began as a fundraising competition involving Grand Valley State University. Through last year, the institutions combined to raise $652,385 for nonprofits and organizations. But GVSU student leaders withdrew from their role in March.

SVSU students - passionate about philanthropy - acted quickly to keep the tradition alive despite the absence of a partnering university. Now the fundraising will be championed exclusively by SVSU students. Student Association representatives, though, say they hope to identify a partnering university in time to reinsert the tradition's competitive elements for the 2020 fundraiser.

For more information about The ROCK Center for Youth Development, go to therockc4yd.org.

For more information about Battle of the Valley, go to svsu.edu/battleofthevalleys.