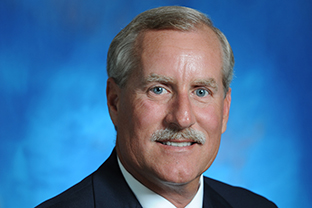 Saginaw Valley State University graduates will hear from one of the institution’s most generous alumni during December commencement exercises.

Scott L. Carmona will offer words of support and inspiration at the two ceremonies, Friday, Dec. 13 at 7 p.m., and Saturday, Dec. 14 at 11 a.m. Both ceremonies are held in O’Neill Arena of SVSU's Ryder Center.

Carmona completed his eight-year term on SVSU’s Board of Control in July. He committed to be the lead donor for the fundraising campaign to support the building addition for the SVSU College of Business now named for him; his generosity and philanthropy also include granting over 25 scholarships annually. The $25 million building addition for the Scott L. Carmona College of Business will open during the 2020 winter semester.

Carmona’s first time being recognized at an SVSU commencement ceremony came in 1981, when the Bay City native was a graduate being honored for receiving a bachelor’s degree in mechanical engineering. His son, Ryan, completed a bachelor's degree in finance in 2008.

While still attending classes at SVSU, Scott Carmona began planting the seeds of his entrepreneurial career. In the late 1970s, he developed a swimming pool maintenance company. By his senior year, he was contracted to perform service work for Coca-Cola USA.

The opportunity allowed him to create a small business that specialized in repairing and re-manufacturing dispensing equipment used in restaurants across the nation. Carmona's company, National Equipment Refurbishers Inc., found success, employing up to 50 people at one point.

Fifteen years later, he sold the business to create and develop other companies, largely in the commercial real estate and automotive aftermarket distribution industries. His business interests eventually reached beyond Michigan. He developed businesses in states such as Texas, New Hampshire and Florida, where he developed an industrial park in the 2000s.

Today, Carmona is the principal owner of Sunrise National Distributors Inc., a Bay City-based distributor of automotive aftermarket products. He owns and manages several real estate developments in Michigan and Florida. He also has remained active in community organizations including the Bay County Growth Alliance, the Dow Bay Area Family YMCA and the McLaren Bay Special Care Hospital board of directors.

When the 38,500-square-foot expansion for the Scott L. Carmona College of Business opens next year, the facility will house state-of-the-art technology as well as classrooms, faculty offices and office space for business programs. Planners say the new space will provide an inviting environment for business leaders and successful alumni to visit campus, benefit from the resources, and work with the next generation of business students studying at the campus.