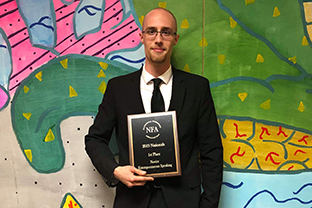 Participating in only his third competition ever on the college forensics circuit, a Saginaw Valley State University senior this week became a national champion.

Dan Visnovsky, a political science major from Sparta and a member of SVSU's forensics team, qualified to compete against the best U.S. college talent at the National Forensic Association Tournament April 18-22 in Santa Ana, California. A panel of judges at the public speaking-based competition crowned him the first-place award recipient in the novice category of extemporaneous speaking, which featured students who had participated in fewer than six college forensics competitions.

In total, 180 college students competed in the extemporaneous speaking category, where the finalists participated in four rounds of play.

Success requires intense study and preparation. In each round, participants are asked to respond to a question related to world politics, allowed 30 minutes to research and develop an answer, and then must deliver their statement in seven minutes to a panel of three judges – all in front of a crowd of their peers.

Visnovsky had competed in only two forensics tournaments before winning the national title in his third appearance.

“I was a little nervous,” he said. “I had very little concept of how well I would do. They were challenging questions.”

Visnovsky said his interest in reading about world politics aided in his performance.

“Although at this tournament, the questions were more focused on international economics, and I'm more familiar with foreign policy,” he said.

For the fourth and final round, Visnovsky was asked to present a strategy for defeating a political party in Finland. Ryan Rigda, an SVSU lecturer of communications and an assistant director for the university's forensics team, was in the audience when Visnovsky delivered the winning speech.

“It just amazed me how he was able to speak about the subject so logically and coherently,” Rigda said. “It was like he was from Finland.”

Visnovsky and Jessica Carpenter, a communication major from Saginaw, were the first students ever to represent SVSU at the national tournament level.

“It was a blast,” Visnovsky said of the experience at the five-day tourney. “I was not expecting that I would win.”

As a senior about to graduate from SVSU next month, it marked Visnovsky’s final tournament, but SVSU’s forensics program is building for the future. It was founded in 2000 by Amy Pierce, an SVSU associate professor of communication who remains the team's coach.

Rigda said he hopes the team's appearance in the nationals inspires more student participation for next academic year. Rigda's sister, Mikayla Rigda – who competed at the nationals this week as a Delta College student – plans to enroll at SVSU in the fall and join her brother's team. And five members from this year's team are expected to return.

After Visnovsky graduates in May graduation, he said he will participate in a fellowship program at a state policy organization in Austin, Texas. He hopes one day to attend graduate school in pursuit of a career working for political nonprofit organizations.