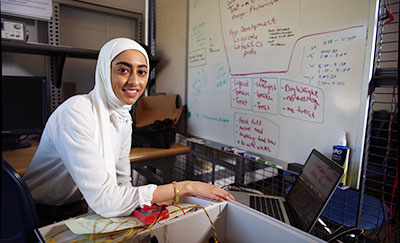 The May 2017 graduate of Saginaw Valley State University began her push against convention the day she decided to move across the planet to pursue a bachelor’s degree. And the native of Saudi Arabia continued to defy convention when she decided to pursue that degree in electrical engineering, a choice of study rarely pursued by women.

“It was difficult and challenging for me,” Albanawi said of her choices.

As it turned out, Albanawi was more than ready to face “difficult and challenging” exams — and pass them all with flying colors.

“Challenging topics of science interest me and is great motivation for me,” she said.

Albanawi also is motivated to empower others who share her experience.

“One of my ultimate goals is to raise awareness of the importance of diversity in STEM education and work environments,” she said.

Determined to overcome the challenges before her, Albanawi passed many tests – academic and otherwise – to complete her degree.

The first test came in the form of a language barrier. Albanawi began studying the English language in sixth grade, and her teenage habits weren’t all that different from her American counterparts: She was a fan of the music, movies and books that were popular stateside. So, when it was time to move to the United States in the winter of 2013, her handle on the language allowed her to move relatively quickly through SVSU’s English as a Second Language program compared to many of her international student peers.

Albanawi’s early interest in American pop culture also buffered the culture shock that can accompany some international students’ move to a new nation. In fact, initial homesickness inspired her to listen to more Arabic music than American music for the first time in years.

Family also helped the transition to attending school in America. She first learned about SVSU from cousins who attended the university. Their familiarity with the institution and their presence in the hallways during her early years at SVSU helped her adapt to the surroundings.

Her decision to pursue a degree in electrical engineering was inspired by her proficiency in the sciences while she was a student in Saudi Arabia. Her earliest academic interests involved communication- and journalism-related pursuits, but after she scored well in tests related to engineering, educators encouraged her to pursue studies in those fields.

After exploring the electrical engineering program at SVSU, she was sold.

“There is always something interesting to learn every day, which served as a great motivation for me to know more and learn more, and also to find a topic of interest that I will be focusing on in my graduate study later,” she said.

“Analysis, critical thinking and problem solving is what engineering all about, and what challenged me the most — and motivates me — in the field. We have to solve real-world problems and be accustomed and prepared to many failed attempts before finally coming up with a great solution.”

One of Albanawi’s mentors at SVSU was Rajani Muraleedharan, assistant professor of electrical and computer engineering and faculty adviser to SVSU's chapter of the Society of Women Engineers.

“Sarah is a talented young engineer, and a leader-in-the-making who will empower women and minorities in engineering globally,” Muraleedharan said.

During Albanawi’s first few electrical engineering classes, she was the lone female student.

“That made it awkward for a little bit of time, but at some point, I convinced myself that I was capable of doing engineering,” she said. “That pushed me to work harder.”

She credited some of her success over the years to the help of faculty such as Muraleedharan and Altaf Rahman, professor of electrical and computer engineering.

“My professors have supported me in so many ways,” Albanawi said.

She applied what they taught her in classroom and laboratories to a capstone project which is required for engineering students to graduate. For that project, Albanawi and some of her classmates designed and built a “smart kennel” made to release animals from their enclosures for bathroom breaks. The technology is triggered in part by systems that utilize sensor technology and Wi-Fi to wirelessly monitor the pet. The pet is rewarded for returning to the kennel when the technology releases a treat and plays a personalized message of encouragement along the lines of “Good boy.”

The project aims to reduce the number of pets turned away by owners due to the owner’s active lifestyle.

Muraleedharan was impressed with the work.

The next challenge facing Albanawi involves choosing a graduate school to pursue a master’s degree or Ph.D. in an engineering-related program. Eventually, she hopes to work as a researcher in engineering or a college professor who challenges students the way SVSU challenged her.

“My long-term goals are achieving a successful professional career in STEM education, conducting research and development, as well as becoming an active member of the society of engineers to encourage development, innovation and research,” she said.

Albanawi said she will remember her time at SVSU fondly.

“I’ve made a lot of great memories here,” she said. “I’m grateful for this journey, and I know my hard work has paid off.”