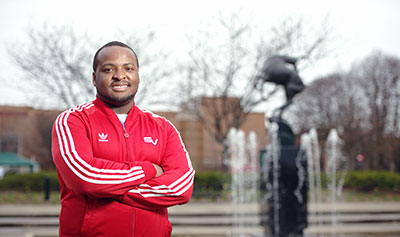 As a future accounting asset to The Dow Chemical Company, Kevin Finley crossed the graduation stage in May 2017 with excitement and a firm sense of purpose after five years at Saginaw Valley State University. The Flint native has replaced childhood scars with an ever-present smile, having learned many valuable lessons inside and outside the classroom.

"In leadership and in life, it's not just about the grades," Finley said.

Finely has the grades – he made the Deans' list all 10 semesters, studying professional accountancy – but it was getting in touch with his values and those of his university, and putting those values into action that taught him as much or more.

"SVSU has taught me that there's more to life than just being smart. Do you care about the community? Are you humble? Do you want to see others around you succeed with you? In life, you can't do anything by yourself and SVSU has that community focus that I really appreciate."

With aspirations to start his own mentorship program one day, Finley started planning out his future while in high school at Flint Southwestern Academy where he took his first accounting class. There, he discovered not only his proficiency in the field, but his love for it as well.

After discovering this passion, Finley took a tour of SVSU during his senior year of high school. Though he had been considering some other universities at the time, the welcoming campus of SVSU and the friendly people who inhabited it convinced him to enroll.

Finley certainly stood out. As a member of the Roberts Fellowship Program – a student leadership development initiative at SVSU – he built upon his leadership and academic achievement through service projects and study. Finley and nine of his classmates traveled to Asia in May as the culmination of the program.

"One of the goals of the program is to become well-rounded in global citizenship while making us aware of different social issues in different areas of the world," he said.

Recognized by his fellow students, Finley beamed with pride after being elected to Homecoming Court in the fall of 2015.

"It was just an honor to make court – just to have that experience was kind of cool," he said. "I thought, 'Wow. I affected people enough on this campus to even make court.'"

Students knew Finley because he signed up for nearly every high-profile position a student can have. He worked as a resident assistant, a campus tour guide, and an orientation leader, helping new students acclimate to SVSU.

Through his involvement with Delta Sigma Pi, a business fraternity, Finley built his résumé further. He worked his way up, eventually serving as the vice president of finance for a year and a half before serving as the fraternity's president for a year. Finley was awarded the Huron Regional Collegian of the Year in 2016 for Delta Sigma Pi; the award is presented to a member of the fraternity who represents the distinguished values and ideals of the organization through achievement, participation and character.

Finley's drive and determination saw him serve as an accounting tutor in SVSU's tutoring center as well as a research assistant in the Office of Institutional Research. He also worked as an intern with The Dow Chemical Company, where he made connections and secured a full-time job after graduation.

A first-generation college student, Finley remembers a time when the future didn't always look so bright.

"I was beaten up really badly in high school," he said. "I was really, really frustrated but then I realized, it's not about who does what to you. It's about your response. I can say, 'I don't want to see that happen to someone else so let me show people that there's more to life than negativity.' I don't want to let stuff like that hinder me. I just want to stay positive."

Finley spreads that positivity through his connections at SVSU, in the community and in his hometown.

"My ultimate goal is to become a CFO – a chief financial officer – of a company, and, although I have a passion for accounting, I also have a passion for mentorship," he said. "Coming from Flint, Michigan, I've always told myself that I wanted to give back by starting a mentorship program or possibly doing a scholarship for people growing up in the Flint area."

Finley learned from multiple mentors to him during his time at SVSU.

"I was really lucky to have great mentors in my life," he said. Among those mentors were Ian Philbrick, a former resident director with SVSU Residential Life.

"He taught me about leadership and he held me accountable. Stuff like that is intangible. You can't put a value on it," Finley said.

Another mentor was Nick Wagner, SVSU's director of institutional research. "He wants to see you succeed. He gives his all to the community and he would always make time for students," Finley said.

Wagner has worked closely with Finley over the course of his time at SVSU and spoke highly of him as both a student and a young professional.

"Kevin has been one of the most unique and profound students I have ever had the chance to interact with at SVSU," Wagner said. "He displays a constant desire to learn and become better all while being selfless and humble. He is a student the university should be extremely proud of and has set the standard for what it means to be a student leader."

With his post-graduation plans locked down, Finley is excited to see where his future will lead. Hard work and dedication certainly play a large role in Finley's story but he also finds motivation in an optimistic attitude and these words of wisdom:

"Be honest with who you are as a student leader," Finley said. "The biggest thing I could recommend to anyone would be to pursue your passion. Even if it takes a little longer, do what makes you happy."