Future: Marianna is currently pursuing her Master of Social Work degree at the University of Louisville. 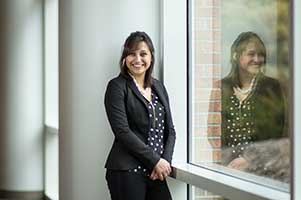 Marianna Cuevas knows that leaving SVSU to take the next step toward fulfilling her professional ambitions will be bittersweet.

The social work major has a deep passion for SVSU and is sad to leave the university behind, but is excited to pursue her personal and professional goals.

Cuevas didn’t always know she wanted to be a social work major. SVSU’s competitive nursing program brought her to SVSU, and after changing her major five times, she eventually discovered her passion after joining the social work program.

After some trial and error, the Manchester native was elated when she learned that the social work profession aligned with her own goals and interests. Cuevas found a path that would allow her to make an impact in the areas of social justice, homelessness, poverty and mental health — the subjects she is most passionate about. Despite her initial indecision, Cuevas still managed to graduate within four years and plans to pursue a master’s in social work in the fall.

“My family always put a strong emphasis on human relationships,” she said. “I wanted a job that was fulfilling. I love connecting people to the things they need.”

Cuevas has worked as a research assistant at SVSU — studying library services and what it can do for homeless people — and as an assault advocate for the Saginaw Child and Family Services Center. When she finishes grad school, she would like to work in case management in either a homeless shelter or women’s shelter.

"I am struck by Marianna's high energy and commitment to every task she takes on,” said Mark Geisler, professor of social work at SVSU. “For the research project on homelessness with which she has assisted me, she has demonstrated not only academic proficiency and integrity, but also a compassion toward our subjects that embraces the social work values of dignity and worth of all. Her positive attitude and optimism towards her work are indeed infectious."

Inspired by her internship as an assault advocate at the Saginaw Child and Family Services Center, Cuevas started the Sexual Assault Prevention Team (SAPT) on campus in September 2014.

Cuevas is grateful for the unique experience of starting her own student organization and is proud of how SAPT has grown over the last two years. The timing was impeccable as it coincided with new federal laws requiring more sexual assault prevention measures. Faculty and staff at SVSU have also been very supportive of the organization and have aided in its success, she said.

In addition to her efforts in preventing sexual assault, Cuevas has taken part in several service trips across the globe. She was able to do this through a student organization that sends students to volunteer during winter and spring breaks. Cuevas was also fortunate enough to meet her fiancé, William Strasz, on one of her service trips. The two SVSU graduates plan to get married this fall.

“I am proud that I trusted my gut and came to SVSU,” she said. “My experiences here have made such a significant impact on my life. I love it here and I am going to miss it."