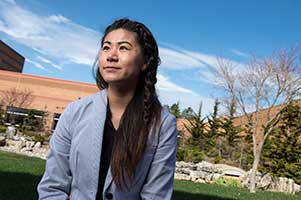 Chi Weng is more than adapting to the idea of wearing a red ceremonial robe during the May 2016 Saginaw Valley State University commencement ceremony.

The Shanghai native will be recognized at the event for earning a bachelor’s degree in computer information systems, but it won’t be her first go-around at SVSU’s traditional commemoration. She also was honored during the May 2013 commencement for receiving a bachelor’s in graphic design.

“I think I like the red better,” she confessed.

The change represents a subtle shift in the world Weng is accustomed to, but it’s emblematic of a larger theme of adaptation that she experienced when enrolling at SVSU in 2008.

Weng knew little English before arriving on campus eight years ago. The language and cultural barriers made adjusting to her new surroundings difficult at first. Add to that the adjustment of leaving the most populous city in the most populous nation in the world — China — for a campus located in the much-quieter setting of the Great Lakes Bay Region.

She spent many of her first months at SVSU in her on-campus apartment as she learned from the university’s English language courses. Ironically, it was in her bedroom where she became acquainted with reruns of the hit ’90s American comedy series, Friends, which sped up her understanding of English and helped her make friends with classmates.

“I was very shy at first and I didn’t really talk to anyone,” she said. “Over time, as I learned how to communicate, I started to feel more comfortable and confident. I made many friends.”

At first, those friends were fellow Chinese international students, whom the vehicle-less Weng often carpooled with when exploring Michigan. Eventually, as her language barriers crumbled, she began befriending American classmates, too. She even bought her first car.

“You start to feel more confident and more part of the American culture,” Weng said of being an international student.

Those confidence-building and communication skills led her to seek a leadership role and in 2014, her peers elected her to serve as a representative in SVSU’s student government, the Student Association.

“With so many, we are much more a part of the campus now,” she said. “There is so much more to learn from each other when there are more people coming here from around the world.”

While Weng said she will miss the campus, she is ready for the next chapter of her adaptation: finding a full-time job in the U.S. She plans to apply for positions that will utilize her unique blend of training in both graphic design and computer information systems.

But first comes graduation day — this time with red robes. Another element that will be different during her second commencement ceremony: Her parents, unable to attend in 2013, plan to fly from China to see their daughter graduate.

“I’ll be happy to see them in the audience,” Weng said. “They’re coming a long way.”

As Weng admitted, she’s come a long way, too.