Next up: University of Michigan, Ph.D. program in chemical biology 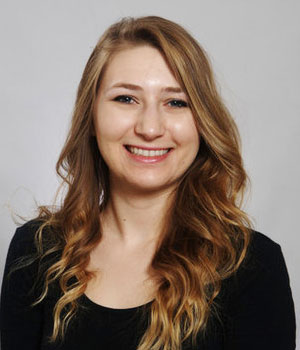 April Lukowski is the epitome of the homegrown college student who found a calling and an exemplary education at Saginaw Valley State University, all while helping the community where she was raised.

Now that experience has opened new doors. Lukowski this fall will begin postgraduate studies at the University of Michigan, where she is enrolled in the Ph.D. program for chemical biology.

“It’s a very competitive program, and I was lucky to get into it,” said Lukowski, set to graduate from SVSU in May with a bachelor’s degree in biochemistry. “It was my top choice.”

Lukowski isn’t a stranger to challenges. Facing them at SVSU has included taking on some of the university’s top research opportunities, first with her Honors Program thesis and later via the campus-based Saginaw Bay Environmental Science Institute, where she studied bodies of water that have supported her community for generations.

But her first challenge at SVSU involved finding a niche academically. The 2011 Bay City Central High School graduate enrolled at the university, unsure at first which academic program best suited her.

Lukowski was a recipient of the Bay Area Community Foundation’s Bay Commitment Scholarship — an initiative supporting high-achieving, first-generation students in Bay County who attend SVSU or Delta College — and her interests largely centered on the arts.

“I was more into art and music and things like that,” she said, “but I also knew I always liked my science classes in high school.” Lukowski took both Advanced Placement biology and chemistry classes at Bay City Central, and performed well.

“I was being exposed to college-level science classes there, and I decided to explore those more (in college),” she said.

“Then I met Dr. Sivy,” Lukowski said, referring to Tami Sivy, the associate professor of chemistry who advised Lukowski to explore biochemistry.

“I liked it because it challenged me in ways I can handle,” she said. “There’s more math, and numbers make more sense to me.”

Sivy said the match made sense, and soon Lukowski found her footing academically.

“April has blossomed into a conscientious researcher and an excellent student,” Sivy said. “At first, she was unsure as to what she wanted to do, but she took advantage of every opportunity that was offered her, and became more confident in her abilities and increasingly more clear in her goals for her future. She is extremely well-prepared for her continuation to graduate school, not only because of her work in the classroom, but probably more so because of the variety of research projects with which she has been involved.”

Lukowski said she discovered a love for research as a sophomore when she studied isoprene enzymes and fir trees as part of her Honors Program thesis. That passion continued with her undergraduate research with the Saginaw Bay Environmental Science Institute. There, she studied the Saginaw Bay watershed, testing bacteria content in the water.

She credits SVSU’s faculty in part for helping her discover her passion and take on academic challenges.

“The faculty here are really supportive, especially in the science departments,” Lukowski said. “It’s been a great experience here.”