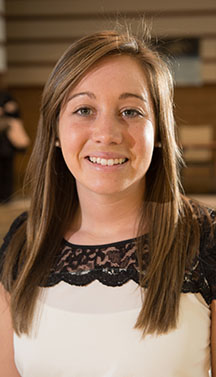 Shepherd native Kerri Vasold been accepted to the Michigan State University Ph.D. program for kinesiology. She begins this fall.

Vasold is one of some 1,000 students set to graduate from Saginaw Valley State University this May. Not long after collecting her bachelor's degree in exercise science, Vasold will prepare for the next academic step in her pursuit of becoming a kinesiology educator at the college level.

The 2010 Shepherd High School graduate is a capable candidate for such a profession, says one of her mentors.

Jeremy Knous, SVSU associate professor of kinesiology, assigned Vasold the moniker "Mama Duck" because of her outstanding leadership abilities, often displayed in the way she organizes gatherings and makes sure her student peers are in the best position to succeed.

"She takes charge of things so it's run in proper fashion," Knous said. "She has an absolute passion to reach her goals, and while she's doing that, she has a kind heart to take care of others."

Her leadership skills, smarts and devotion to the study of exercise science have made her a star student at SVSU, Knous said.

"From an academic standpoint, she is one of the brightest people I've worked with," Knous said. "She's intelligent, humble. She'll do very well in graduate school."

And beyond, Knous predicts.

"She has the potential to be a great professor," said Knous, who tasks Vasold as a teaching assistant in several of his classrooms.

"I see her being a game changer in the field of kinesiology. She's going to be a very good asset to us or another university."

Vasold credits SVSU for equipping her for that next step.

And SVSU nearly never happened for her. Before graduating from Shepherd High School, Vasold had applied to eight colleges. When a friend suggested SVSU as a destination, her curiosity led her to tour the campus.

"I absolutely fell in love with it," Vasold said of the springtime visit. "The people here were relatable. I wanted to be here."

She began as a biochemistry major, but by the end of her freshman year, Vasold had developed an interest in kinesiology that hasn't waned since. Her studies in the subject have propelled her toward a number of opportunities.

Vasold, for instance, is a member of the university's Student Exercise Science Association, a group dedicated to raising health awareness in the campus and community.

Last year, she and fellow student Elizabeth Groendal were selected to receive $5,200 in research funds as part of SVSU's Herbert H. and Grace A. Dow Student Research and Creativity Institute. Their project resulted in findings that show people who exercised sparsely were more likely to increase their physical activity if they wore fitness wristband monitors, also known as Fitbit technology.

Vasold also is a member of the institution's Roberts Fellowship Program, a year-long initiative that involves leadership development sessions for a dozen students. The opportunity finishes with a visit to Asia in May.

"I'm really excited but really nervous at the same time," she said of the coming trip abroad. "It's going to be a bit of a culture shock."

Knous said, after she's gone from the university, her accomplishments as a student there will make her a shining example for prospective Cardinals.

"She's a great representation of what students can achieve at SVSU," Knous said. "She came here from high school, achieving, and she will continue to do that."