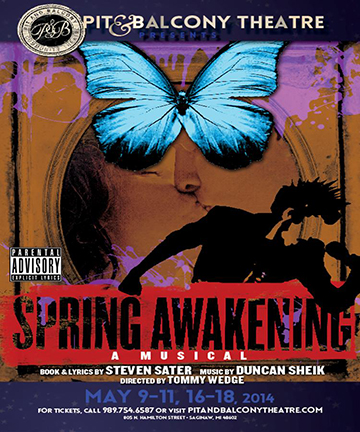 Nearly half of the play’s cast and production crew are affiliated with the university, including director Tommy Wedge, an adjunct instructor in SVSU’s theatre department.

The adaptation of the Tony Award-winning coming-of-age musical set in 1891 Germany kicked off its 2-weekend run May 9 in the Saginaw theatre, 805 N. Hamilton. The final weekend includes showings on Friday and Saturday, May 16-17, at 8 p.m., and Sunday, May 18, at 3 p.m.

“It’s going really well,” Wedge said of the production. “’Spring Awakening’ is a little bit of a controversial show that deals with a lot of adult themes, but we had an almost sold-out Friday night and a great talk-back session on Saturday night.”

Wedge said six SVSU students are among the 14 cast members and seven students — along with one alumna and an SVSU staff member — are on the 20-person production team.

Sara Taylor, a 2002 SVSU graduate, is the play’s music director; and Gerald Dennis, SVSU technical director, is the set designer.

General admission tickets for “Spring Awakening” are $22. Those with student IDs can pay $10 if they purchase tickets up to 15 minutes before the show starts.

For more information, visit Pit and Balcony's website at www.pitandbalconytheatre.com.