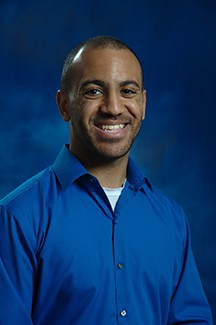 When Marlin Jenkins arrived as a freshman at Saginaw Valley State University, he was a Woodhaven native looking for a campus with “a small community feel.”

Four years later, as he prepares to exit the school after receiving his bachelor's degree in May, the creative writing major says his ambition now is to become part of a community no smaller than the world itself.

"I'd like to live overseas, in West Africa or East Asia, maybe teaching English or doing missionary work," Jenkins said. "I think of myself as a global citizen now."

Jenkins said his horizons were expanded by his SVSU experience -- most profoundly by his time spent as a member of the Roberts Fellowship Program last year. The SVSU initiative yearly provides a dozen students with leadership development opportunities, including a trip to East Asia each May.

"I was skeptical of the program before I applied, but I really loved it," he said. "It was a great opportunity to be pushed and stretched and challenged. It helped me to think much larger."

The program was one of many avenues Jenkins explored that helped him become a better leader.

Jenkins, a 2010 graduate of Michigan Health Academy in Detroit, said his move to SVSU was partly inspired by a desire to pursue a career in professional and technical writing. Eventually, that ambition changed. The part-time poet said now he wants one day to help others by becoming a teacher.

"I went from something that was more of a hobby to something I wanted to become my career field," he said. "I also added on a black studies minor, and that's really helped me to get a better idea of race and culture and intercultural studies from a scholarly standpoint."

Outside of the classroom, he's leveraged his way with words into participation in SVSU-based organizations including Cardinal Sins, a campus literary magazine; Music N' Motion, a West Coast swing dancing organization; and Standing In The Gap, a non-denominational campus Christian group.

He also has sharpened his leadership skills -- and carved out a legacy of sorts -- while serving as a tutor in SVSU's Writing Center, where students assist their peers in writing.

"When he was first hired, he told me he wanted to be one of the tutors featured in our cut-outs -- the life-size cardboard images of tutors that serve as advertising for the Writing Center on campus," Raica-Klotz said. "Currently, you can find Marlin on a cut-out on the second floor of the Zahnow Library, but Marlin is actually a three-dimensional advertisement for our Writing Center at SVSU every day."

She said "everyone knows Marlin" now.

"The one quality that sets Marlin apart is his leadership -- in every activity he pursues, he wants to not only be successful," she said, "but lead other people to success as well."